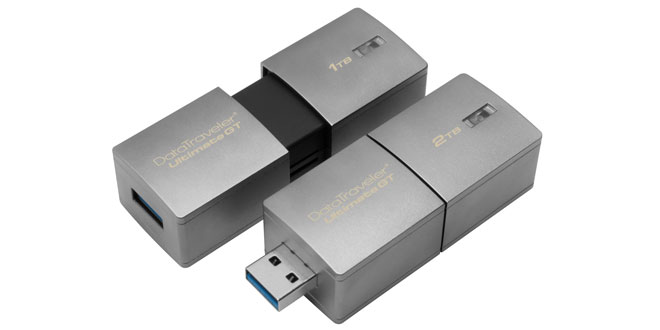 The Guinness World Records world record for the first standard 3.5 inch drive to reach one terabyte in capacity was the Hitachi Deskstar 7k1000, which has a spin rate of 7,100 revolutions per minute. It was launched in 2007.

Guinness World Records also recognized the world record for the smallest microchain drive; it has chain links with centres only 50 micrometres apart. It is constructed of silicon and designed to transmit power in microelectromechanical devices. It was created by Sandia National Laboratories, Albuquerque, New Mexico, USA, and announced in January 2002.

Power users will have the ability to store massive amounts of data in a small form factor, including up to 70 hours of 4K video on a single 2TB drive*.

DataTraveler Ultimate GT offers superior quality in a high-end design as it is made of a zinc-alloy metal casing for shock resistance. Its compact size gives the tech enthusiast or professional user an easily portable solution to store and transfer their high capacity files.

“At Kingston, we push the limits of what’s possible,” said Jean Wong, Flash business manager. “With the DataTraveler Ultimate GT, we empower users to increase their data storage mobility in a highly manageable form factor. This is a terrific follow up to our 1TB drive released in 2013 and by doubling the capacity, users can store and carry even larger amounts of data easily.”

DataTraveler Ultimate GT ships in February and will be available in 1TB and 2TB capacities. It is backed by 5-year warranty, free technical support and legendary Kingston reliability.