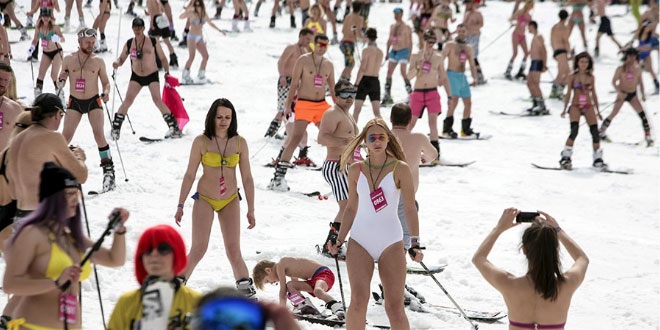 Sochi, Russia – April 21, 2016 – More than 1,000 Russian skiers take to the Sochi slopes in bikinis and swimsuits in pursuit of breaking the Guinness World Record; the event was part of the BoogelWoogel mountain carnival at the site of the 2014 Olympics.

Photo: Skiers and snow boarders descend from a slope as they attempt to break the record for mass skiing in swimming suits at Rosa Khutor resort near Sochi, Russia.

The Guinness World Records world record for the largest swimwear parade on skis consisted of 500 participants and was achieved by Sugarelle Ltd (Russia) in Sheregesh, Russia, on 20 April 2013.

A reported 1,000 skiers took to the slopes at the Rosa Khutor resort near Sochi.

Despite the snow on the ground, many revelers claimed the weather was perfect for a stripped-down ski.