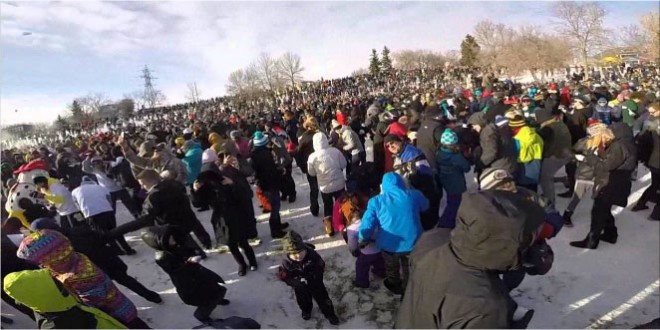 Saskatoon, Canada – February 1, 2016 – Saskatoon showed up to Victoria Park in full force to make sure that the city became home to a World Record; more than 8,200 people came to claim the world’s largest snowball fight title.

The Guinness World Records world record for the largest snowball fight was achieved by 5,834 participants at an event organized by Seattle Snow Day (USA) at Seattle Center, Washington, USA, on 12 January 2013.

Guinness World Records also recognized the world record for the largest snowball measures 10.04 m (32.94 ft) in circumference and was rolled by students from ASME Michigan Technological University (USA), in Houghton, Michigan, USA, on 29 March 2013. The diameter of the snowball measures 3.20 m (10.45 ft) and its height reaches 3.28 m (9.28 ft).

The current Guinness World Records world record is held by Seattle, WA, with snowballs thrown by 5,834 people, that means the bridge city beat it by more than 2,300 participants.

In order to break the record, participants had to throw snowballs for at least one minute, which they successfully did.

The feat was conceived by members of Yukigassen Team Canada.