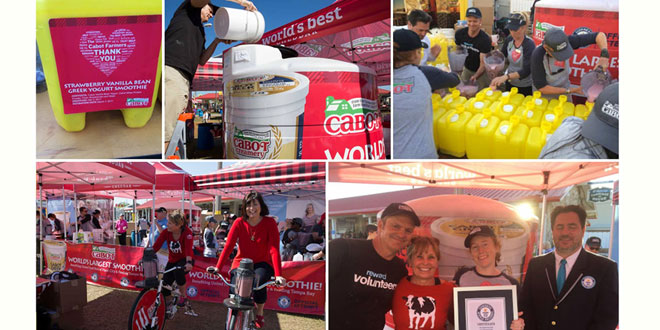 Tampa, Florida, USA – March 17, 2017 – A record-setting one thousand pounds of smoothie was blended individually by people on bikes in Tampa, Florida, with the help of 250 pounds of Cabot’s Greek Yogurt by Vermont’s own Cabot Creamery, which sets the new world record for the Largest Smoothie.

Prior to McGill, Cabot had set a smoothie record in 2013 with a mixture weighing in at more than 400 gallons.

Cabot’s record attempt enabled the company to raise and contribute nearly $10,000 in cash and product to the food banks, and the remaining smoothie product will help feed thousands of people in need throughout Central Florida.
Cabot also donated more than 500lb of Cabot Seriously Sharp Cheddar and Cabot Alpine Cheddar to the food banks.

“Our farmers are happy to recapture the World Record title for the world’s largest smoothie to benefit United Food Bank of Plant City and Feeding Tampa Bay,” Roberta MacDonald, senior vice president of marketing for Cabot Creamery Co-operative, said in a statement.

“The 1,100 farm families who own Cabot Creamery are dedicated to supporting communities where we sell our dairy products, and funding and undertaking this colossal effort to raise money for United Food Bank of Plant City and Feeding Tampa Bay is one of the many ways our farm families give back to those in need.”