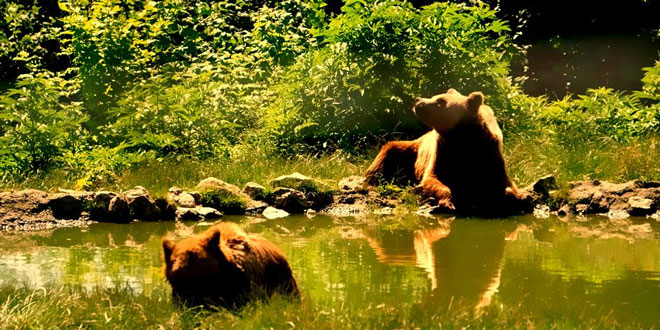 Zarnesti, BV, Romania – July 28, 2017 – The “Libearty” sanctuary has 69 hectares of oak forest; 95 bears have been rescued since the “Libearty” Sanctuary was open, which makes it the World’s Largest Sanctuary of brown bears.

Photo: 95 bears have been rescued since the “Libearty” Sanctuary was open. Libearty is the largest Sanctuary of brown bears in the world. It has 69 hectares of oak forest – a concession given for 49 years by the City Hall of Zarnesti, which became a partner in this project.

The Guinness World Records world record for the longest line of teddy bears consists of 15,534 bears and was achieved by Finlay Church (UK) at the Alvechurch Cricket Club in Alvechurch, Worcestershire, UK, on 3 May 2015. The line measured 2,106 m (6,909 ft 5.22 in) in length.

The “Millions of Friends” Association signed a public-private partnership with the City Hall of Zarnesti, through which “we were offered the concession of the necessary land, for 49 years, to build the “Libearty” sanctuary.”

The World Animal Protection (formerly known as World Society for the Protection of Animals) joined the Millions of Friends Association efforts in the largest project to rescue and care for brown bears in Romania, “Saving captive bears”.

95 bears have been rescued since the “Libearty” Sanctuary was open. All the bears had lived a nightmare, full of abuse, in tiny cages in comparison with their needs.

Many bears came to the Zarnesti Sanctuary after Romania joined the European Union in 2007. European legislation that Romania adopted has led to the closure of several Romanian zoos which did not provide decent minimum conditions for animals in their care.

They were prisoners in cages with rusted bars, with cement under foot instead of earth and grass.

The Sanctuary also boasts the rescue of four bears taken from miserable conditions in other countries.

“Bears Maria and Marko were brought from Albania, Misha came from Georgia and Betsy is a bear rescued from Texas, USA who came to us through the intervention of the Houston SPCA (USA).

“Before they came to us, some of them never knew how to climb a tree, how to hide in the forest from the sun on hot days, or how to enjoy few minutes in deep enough water for splashing and cooling off.

“Many were caged on the terraces in front of restaurants, hotels, guesthouses, lodges and gas stations, as tourist attractions. There were also cases of “overwhelming love” of some people who, instead of letting the bears live in their natural forest environment, they preferred to keep them behind bars as pets in factories, monasteries or mini-zoos arranged in their own households.

You can also buy the book called Bear Sanctuary which tells the story of how the Libearty sanctuary was created, illustrated with photos of the rescued bears and details of the rescues. The book is available from Amazon at: http://amzn.to/pWBWaQ

Share
Previous Most flowers on a lily
Next Largest dinosaur footprints