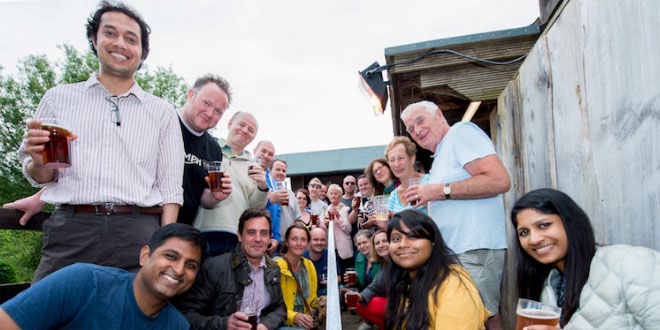 London, UK – June 20, 2016 – A world record was set at Avoncliff’s Cross Guns pub when Holt’s brewery bought the largest round of beer; between noon and 2pm, Box Steam Brewery ordered 412 drinks for assembled guests including the Mayor of Trowbridge, Councillor Linda Self, thus setting the new world record for the Largest round of beer.

Photo: Over a two-hour period a team of five bar staff, pulled pumps and tapped four, nine gallon casks to ensure more than 400 people enjoyed a drink at their expense to mark the Queen’s 90th birthday.

The Box Steam Brewery bought 412 drinks at the Cross Guns pub in Wiltshire over a two hour period, which included 283 pints (35.4 imperial) gallons of its Tunnel Vision ale.

Over a two-hour period a team of five bar staff, including landlady Annette Roberts and husband and brewery owner Andy, pulled pumps and tapped four, nine gallon casks to ensure more than 400 people enjoyed a drink at their expense to mark the Queen’s 90th birthday, the Gazette & Herald reports.

Andy Roberts, MD of Box Steam Brewery, said: “We wanted to mark the occasion of Her Majesty’s special day in the way we know best. It was our pleasure to extend our hospitality to friends and neighbours.”

Merle Haggard landed in the Guinness Book of World Records after he ordered the largest round of drinks ever (5,095 one-ounce drinks, which added up to 40 gallons overall, to the tune of $12,737.50).

Mr Roberts added: “Our bar bill was not as big as Mr Haggard’s, but we think we can claim to have bought the world’s biggest round of beers, that is for sure.”