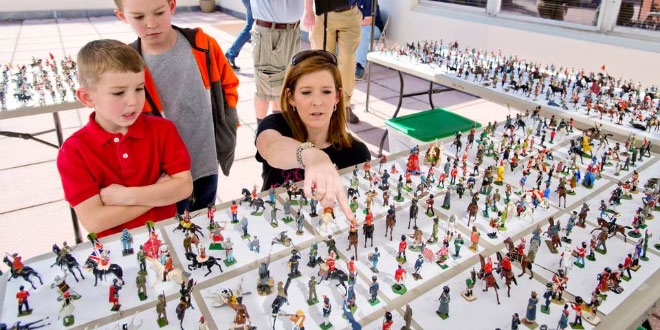 Photo: Jonathan Waters has collected soldiers from a wide range of wars from American and world history, including from medieval times.

The Guinness World Records world record for the largest collection of model trucks belongs to Peter and Jens Pittack of Wiesenburg, Germany, with 2,169 different trucks; which they have been collecting since 1997. The drink-trucks are in the scale of 1:87.

Guinness World Records also recognized the world record for the largest collection of military models is 2,815 models and belongs to Francisco Sánchez Abril (Spain), in Cartagena, Spain, as of 16 February 2012. The collection was started in 1958 and features tanks, artillery, missiles and other military models from all over the world.

Attorney Jonathan Waters has been collecting toy soldiers since he was 5 years old and has traveled the world with his wife looking for additions to his collection.

He does it out of his interest in military history, The Telegraph reports. His overall collection totals over 5,000, including duplicates.

He has collected soldiers from a wide range of wars from American and world history, including from medieval times. Each figure is about two and a quarter inches tall with the uniform painted on in the correct colors.