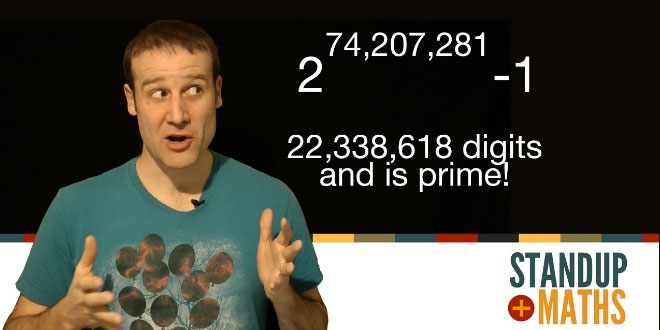 Raleigh, North Carolina, USA – January 21, 2016 – The Great Internet Mersenne Prime Search (GIMPS) celebrated its 20th anniversary with the math discovery of the new largest known prime number, 274,207,281-1, having 22,338,618 digits, on a university computer volunteered by Curtis Cooper for the project.

Photo: A computer at the University of Central Missouri has calculated the world’s largest prime number, coming in at 22,338,618 digits and surpassing the previous record by nearly 5 million digits. The new number is called “M74207281.”

The Guinness World Records world record for the largest known prime number was discovered on 25 January 2013 by Curtis Cooper (USA), a professor of computer science at the University of Central Missouri in Warrensburg, Missouri, USA. The number is (2 to the power of 57,885,161) minus 1 and contains 17,425,170 digits.

Guinness World Records also recognized the world record for the largest national lottery jackpot in history; it was US$656 million (annuity value); US$474 million (cash). It was paid out by the American Mega Millions lottery game on 30 March 2012. The prize was split between three lucky winners – from Illinois, Kansas and Maryland, USA. Each opted to take the cash lump sum rather than the annuity, receiving a share equal to US$158 million. Winning the Mega Millions Jackpot required matching five numbers from 56 and one number (the Mega Ball) from 46 – making the odds of winning a somewhat remote 175,711,536 to 1.

It is almost 5 million digits larger than the previous record prime number, in a special class of extremely rare prime numbers known as Mersenne primes. It is only the 49th known Mersenne prime ever discovered, each increasingly difficult to find.

Mersenne primes were named for the French monk Marin Mersenne, who studied these numbers more than 350 years ago. GIMPS, founded in 1996, has discovered all 15 of the largest known Mersenne primes.

The primality proof took 31 days of non-stop computing on a PC with an Intel I7-4790 CPU. To prove there were no errors in the prime discovery process, the new prime was independently verified using both different software and hardware.

Credit for GIMPS’ prime discoveries goes not only to Dr. Cooper for running the Prime95 software on his university’s computers, Woltman, Kurowski, and Blosser for authoring the software and running the project, but also the thousands of GIMPS volunteers that sifted through millions of non-prime candidates.