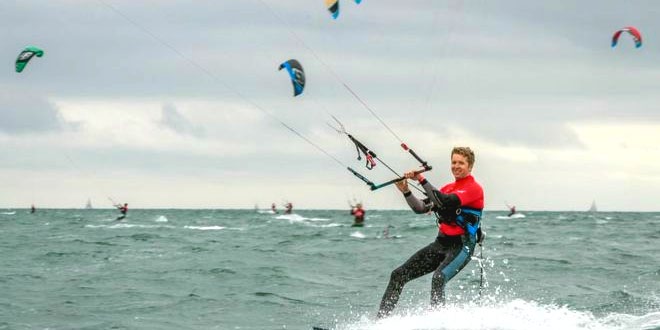 Hayling Island, UK – June 23, 2016 – Some 423 rode the waves off Hayling Island to win the World Record title for the Largest Parade of Kitesurfers; Virgin Kitesurfing Armada brought the gong back to Hayling by beating the mark of 413 set in Cape Town in 2013.

The Guinness World Records world record for the record for the most surfers riding the same wave simultaneously is 110, in an event organised by Kahuna Promotions, at Muizenberg Beach, Cape Town, South Africa on 4 October 2009.

Guinness World Records also recognized the world record for the most people riding a surfboard; it is 66, and was achieved by Visit Huntington Beach and the Epic Big Board Ride (both USA) in Huntington Beach, California, USA, on 20 June 2015.

Kitesurfers from around the world took part in the record attempt at Hayling Island, which took three-and-a-half hours to complete.