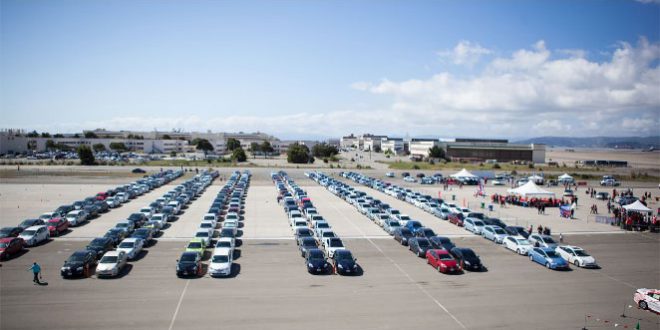 NAS Alameda, California, USA – May 6, 2016 – Toyota Prius owners set a World Record on Earth Day for the largest hybrid parade; in all, 332 Prius owners took part in the lap at the Alameda Air Field.

Photo: Toyota owners, a total of 332 made a parade lap to celebrate the Earth Day on April 22, 2016. The Toyota Prius is a full hybrid electric mid-size hatchback car and is considered to be the cleanest vehicles sold in the United States.

The Guinness World Records world record for the largest parade of electric vehicles is 576 and was achieved at an event organised by Louis Palmer (Switzerland) at Berlin Tempelhof Airport, Berlin, Germany, on 23 May 2015.

Guinness World Records also recognized the world record for the Largest parade of Smart cars, set by a total of 743 Smart cars which participated in a parade organized by Mercedes Benz Austria in Zell am See, Austria, on 23 August 2007.

“The Bay Area is home to hundreds of thousands of proud Prius owners, and we wanted to pay homage to the Prius this Earth Day,” says Pete Carey, vice president and general manager for Toyota Motor Sales.

“We wanted to celebrate this revolutionary vehicle and the folks behind the wheel who’ve always been our early adopters, thinking bigger about their carbon footprint and environmental impact.”

The Toyota Prius is a full hybrid electric mid-size hatchback car and is considered to be the cleanest vehicles sold in the United States.

Toyota Motor Corporation boasts of its Lexus and other Toyota brands are nearly double in terms of numbers of hybrids on the road than any other manufacturer.