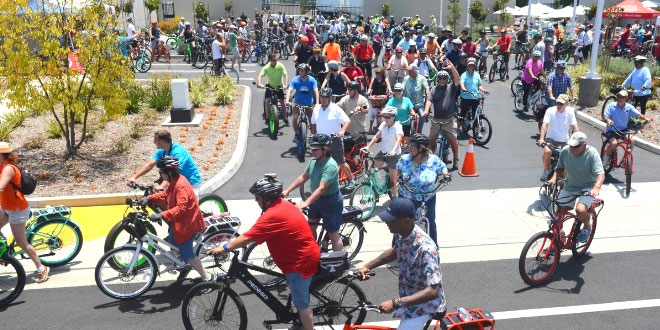 Guinness World Records also recognized the world record for the largest parade of electric vehicles is 576 and was achieved at an event organised by Louis Palmer (Switzerland) at Berlin Tempelhof Airport, Berlin, Germany, on 23 May 2015.

Though there is a Guinness World Record for “the largest parade of electric vehicles” (576 set in 2015 in Berlin), there has never been a category solely for the most electric bike riders, The Orange County Register reports.
This was not a problem for World Record Academy, which has unlimited categories for verifiable records.

“People think these are scooters or motorcycles, but they are not,” said Don DiCostanzo, Pedego co-founder and CEO. “These bikes produce no noise and no pollution … just try it and you’ll have fun.”

As part of the event, DiCostanzo said, his company is donating $10,000 to HomeAid Orange County, an organization that helps the homeless.