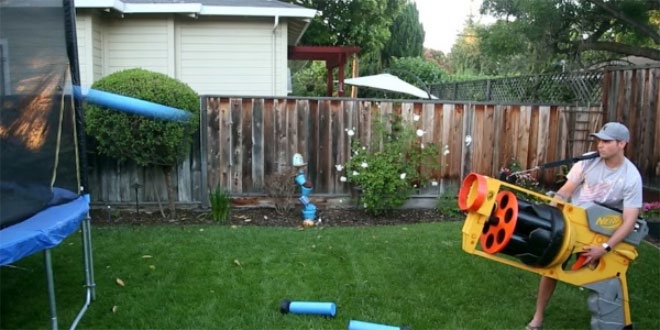 The Guinness World Records world record for the largest water pistol fight involved 3,875 participants and was achieved by the University of California, Irvine at an event organised by NLA Sports (both USA) in Irvine, California, USA, on 24 September 2013.

Guinness World Records also recognized the world record for the largest toy pistol fight; it consists of 2,289 participants and was achieved by Jared’s Epic NERF Battle (USA), at AT&T Stadium, in Arlington, Texas, USA, on 12 March 2016.

The massive Maverick was custom-built by Mark Rober, a former NASA scientist who worked at the Jet Propulsion Laboratory on the Curiosity Rover project for nine years.

The gun is powered by 3,000 pounds of compressed air, which is filtered into a similar 80 psi tank and is the pressure behind one shot.

Rober and his fellow engineers also created a special projectile for use in the gun, which they ended up launching more than 130 yards. It fires huge darts made out of toilet plungers at 40 mph!

Rober’s collaborators, two fellow engineers and YouTubers called the PyroGeeks, explain that the power source for the gun is a paintball air tank that can power up to 20 shots.