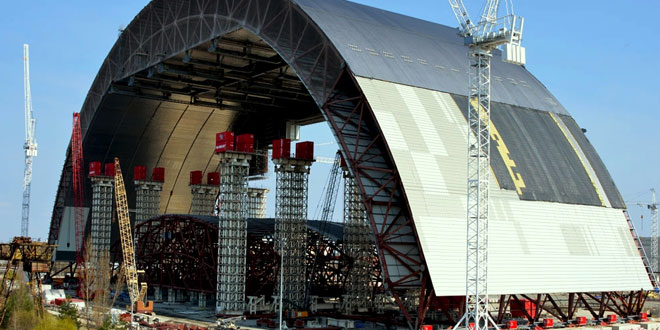 Chernobyl, Ukraine – November 30, 2016 – Ukraine unveiled the world’s largest moveable metal structure over the Chernobyl nuclear power plant’s doomed fourth reactor to ensure the safety of Europeans for future generations; the gigantic arch soars 108 metres (355 feet) into the sky — making it taller than New York‘s Statue of Liberty — while its weight of 36,000 tons is three times heavier than the Eiffel Tower in Paris.

Photo: The arch-shaped 110-meter-tall, 257-meter-wide and 164-meter-long metal sarcophagus, which was erected over the reactor using the hydraulic system, became the world’s largest moveable land-based structure.

The Guinness World Records world record for the Worst nuclear submarine accident was on the 6 of October 1986, when Russian nuclear submarine K-219 (Project 667-A Yankee Class) sank in the Atlantic Ocean 965 km (599 miles) North of Bermuda. The submarine carried two nuclear reactors and 16 nuclear missiles, making it the largest cargo of this type resting in the sea, at a depth of 5,800 m (19,028 ft).

Guinness World Records also recognized the world record for the greatest number of man/hours an industrial site has had a registered zero accidents; it is 211,600,000 for Samsung Electronics Co., Ltd. Semiconductor Business Kiheung Site, Yongin City, South Korea between 4 Nov 1991 and 20 Aug 1998.

The gigantic arch soars 108 metres (355 feet) into the sky — making it taller than New York’s Statue of Liberty — while its weight of 36,000 tons is three times heavier than the Eiffel Tower in Paris.

The 2.1-billion-euro ($2.2-billion) structure sponsored by the European Bank for Reconstruction and Development (EBRD) has been edged into place over an existing crumbling dome that the Soviets built in haste when disaster struck three decades ago.

Chernobyl remains the world’s worst civil nuclear accident, having spread contamination throughout the Ukraine and 75 percent of Europe after an experimental safety check gone wrong caused an explosion and subsequent meltdown that spewed radiation out into the atmosphere.

The death toll from the event ranges from about 4,000 to 100,000 depending on whom you ask – due to a cover-up by Russian authorities after the disaster.

Ukrainian authorities now keep a 30-kilometer exclusion zone around the facility, but concerns over the crumbling concrete dome built to contain the reactor after the meltdown have led to $2.2 billion in funding from the European Bank for Reconstruction and Development for the massive new protective structure – which is badly needed.

The new arch should be able to withstand tremors of 6.0 magnitude — a strength rarely seen in eastern Europe — and tornados that strike the region only once every million years.

The equipment inside the arch is expected to be operative by the end of 2017.

Novarka believes that its arch will keep Europe safe from nuclear fallout for the next 100 years.