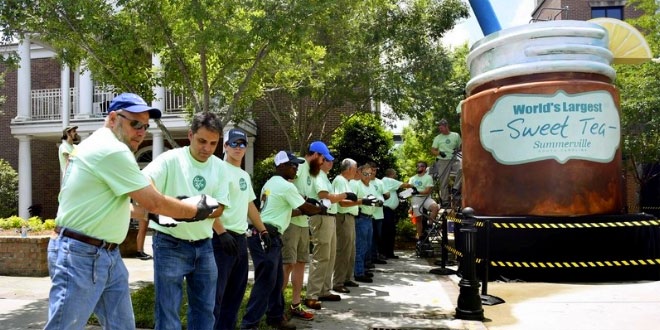 Summerville, South Carolina, USA – June 17, 2016 – Summerville reclaimed the world record for the largest brewed sweet tea with 2,524 gallons of southern-brewed goodness; organizers say there were more than 7,000 people at the event, and more than $20,000 was raised.

Guinness World Records also recognized the world record for the largest cup of tea; it is 4000 litres (7039.01 pt) in volume and was produced by GlaxoSmithKline Beecham (Private) Ltd (Sri Lanka) for Viva, at Burgher Recreation Club grounds in Colombo, Sri Lanka, on 9 October 2010.

Organizers say there were more than 7,000 people at the event, and more than $20,000 was raised. That money raised went right back into the attempt at glory., ABC News4 reports.

“Organizers say the price tag for having the folks from Guinness World Records come to Summerville was about $8,000 – not including travel.”

(Editor’s note: Of course, they could have had our FREE “on site adjudication service”, like this company in Maroc or this company from Singapore).

After mixing 210 pounds of tea, 1,600 pounds of sugar and 300 10-pound blocks of ice, town employees used a plastic oar to stir the popular Southern beverage at 180 degrees for seven hours then cooled down to 33 degrees, The Post and Courier reports.

In the end, Summerville brewed up a record-breaking 2,524 gallons, which it shared with hundreds of festival-goers who purchased $5 souvenir glasses at the Record Smashing Tea Party on the street outside town hall.