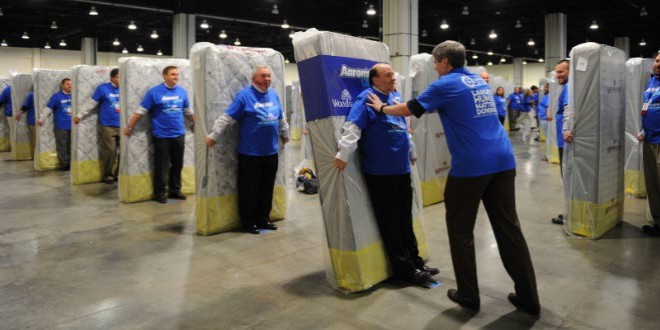 Photo: Aaron’s, Inc. associates broke the GUINNESS WORLD RECORDS(TM) title for the Largest human mattress dominoes this week with CEO John Robinson starting the 1,200 mattress topple by pushing the first human domino at the Gaylord National Resort in Washington, D.C. Aaron’s is donating all 1,200 mattresses to D.C.-area organizations: A Wider Circle, an organization focused on ending individual and family poverty, and to the Sasha Bruce and Wanda Alston youth homeless shelters.

The Guinness World Records world record for the largest human mattress dominoes was achieved by 1,150 participants and was organised by Höffner Möbelgesellschaft GmbH & Co. KG (Germany), in Gründau-Lieblos, Germany, on 12 August 2012.

Guinness World Records also recognized the world record for the tallest domino structure was 9.17 m (30 ft 1.02 in) high and consisted of 8,044 dominos. It was erected and toppled Michael Hörmann and Philipp Zimmermann (Both Germany) in Buchloe, Germany, on 21 April 2014.

The new record for Largest human mattress dominoes – which surpassed the previous Guinness World Records world record of 1,150 – was only part of the event’s significance. Aaron’s is donating all 1,200 mattresses to D.C.-area organizations: A Wider Circle, an organization focused on ending individual and family poverty, and to the Sasha Bruce and Wanda Alston youth homeless shelters.

“Breaking a GUINNESS WORLD RECORDS title has been a great team building event for the 2,000 associates we have attending our National Managers meeting this week,” said Aaron’s CEO John Robinson.

“However, the significance of this event is that through the generosity of our manufacturing plant, Woodhaven, and our ACORP stores, we are able to provide 1,200 beds to needy families in the D.C.-area. Our associates had great fun participating and knowing their efforts support our mission of giving back to our communities.”

The event was made possible with Woodhaven Industries reducing the cost of the mattresses by 50 percent and Aaron’s Community Outreach Program (ACORP) stores generously purchasing the mattresses so that all 1,200 mattresses could be donated to the D.C.-area organizations.

Through Aaron’s Gives programs, which include the Aaron’s Foundation, Inc. and ACORP, Aaron’s gave $2.8 million to communities across the nation in 2015.

Within 13 minutes and 38 seconds, Aaron’s associates had toppled all of the mattresses and produced a new world record.