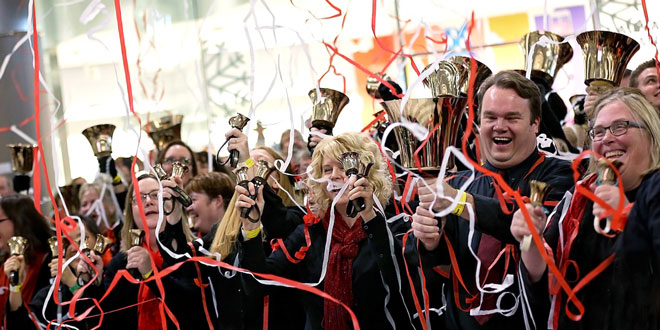 Bloomington, Indiana, USA – November 29, 2016 – The Salvation Army and Handbell Musicians of America set a new World Record at the Mall of America; the 664 musicians who gathered in Bloomington set the new record for the Largest handbell ensemble.

Photo: The Salvation Army and Handbell Musicians of America set the new World Record for the largest handbell choir at Mall of America with 664 musicians performing together for the event. Handbell musicians came from 24 states and Canada and got together in the Rotunda to perform an original five minute piece.

The Guinness World Records world record for the longest continuous time an individual has played the handbells is 28 hr 50 min 21 sec by Joe Defries (Canada) at the Penticton Convention Centre, Penticton, British Columbia, Canada from 5-6 July 2005. He played 511 separate tunes – no repetitions.

Guinness World Records also recognized the world record for the largest cow bell ensemble; it involved 640 participants, in an event organised by Künstlerhaus Boswil (Switzerland) in Boswil, Switzerland, on 6 September 2009.

The previous handbell choir world record of 530 musicians was set in Japan in 2013.

Musicians from 24 states and Canada performed an original 5-minute piece in the MOA Rotunda.

The “Big Ring”event was part of the Salvation Army’s Red Kettle Campaign Kickoff. The Salvation Army Northern Division hopes to raise $11.6 million during the 2016 campaign.