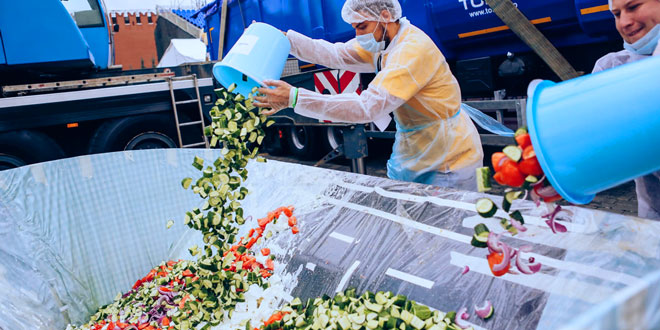 Moscow, Russia – October 8, 2016 – Petros Lambrinidis, a Greek chef from Crete, managed to create a gigantic 20-tonne salad with the help of over 1,000 volunteers in Moscow’s Red Square, thus setting the new world record for the Largest Greek Salad (Largest Salad), according to the World Record Academy.

Photo: Petros Lambrinidis managed to create the gigantic 20-tons salad (!) with the help of over 1,000 volunteers in Moscow’s Red Square.

Guinness World Records also recognized the world record for the longest salad bar; it measures 209.742 m (688 ft 1.56 in) in length and was achieved by Jensen Jewelers (USA) at the Saladbowl Bash in Hudsonville, Michigan, USA, on 27 July 2013. The salad weighed 1,077.99 kg (2,376.56 lb) and contained lettuce, carrot, onion, radish, cabbage, zucchini, celery, cucumber and peppers as well as a selection of dressings.

Petros Lambrinidis was honoured by the Municipality of Melvezi. The Mayor of Matlezi, Kostas Mamoulakis expressed his pride over the chef’s achievement and underlined his contribution to the promotion of the Greek cuisine.

‘I would like to personally congratulate him and wish him health and to continue his inspired creative endeavours’, said Mamoulakis.