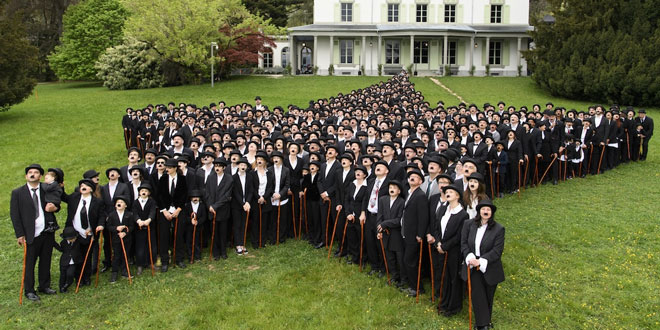 Corsier-sur-Vevey, Switzerland – April 17, 2017 – Six hundred and sixty-two fans of Charlie Chaplin donned their bowler hats and walking sticks and fake moustaches to celebrate the comedian’s 128th birthday on 16 April and set the new world record for the Largest gathering of people dressed as Charlie Chaplin.

Photo: According to Chaplin’s World museum, 662 people — sporting moustaches, canes, black bowler hats, and black suits — congregated at the Manoir de Ban in Corsier-sur-Vevey near Lake Geneva on Sunday, which also marked the museum’s one-year anniversary. The assembled men, women, and children stood in formation to create a giant star and posed for a group photo in front of the Manoir de Ban during an attempt to break the record for the world’s biggest gathering of people dressed as The Tramp.

The Guinness World Records world record for the largest gathering of people dressed as reindeer is 505, achieved at an event organised by Association of Ogori-city Life-supportment (Japan), at Ogori City Culture Centre in Ogori, Fukuoka, Japan, on 25 December 2016.

Guinness World Records also recognized the world record for the largest gathering of people dressed as Lara Croft; it is 270, organised by Meagan Marie (USA), in Paris, France, on 29 October 2016.

The unusual rally, drawing Chaplin fans of all ages from all over Europe, took place at a museum dedicated to the artist at his former home in Corsier-sur-Vevey, western Switzerland.

“There have been big Charlie Chaplin gatherings in the past, but this is the first to be certified by an officer of the law,” Annick Barbezat-Perrin, a spokesman for the museum, told AFP.

Chaplin was born in London 128 years ago on Sunday. He died on Christmas Day, 1977, aged 88, after spending the last decades of his life in Switzerland.

The Chaplin’s World museum, which opened a year ago, also said that it had had around 300,000 visitors in its first 12 months of operation, far outstripping estimates of 220,000.

Share
Previous Most nationalities having a continental breakfast
Next Earthquake Images, Stock Photos