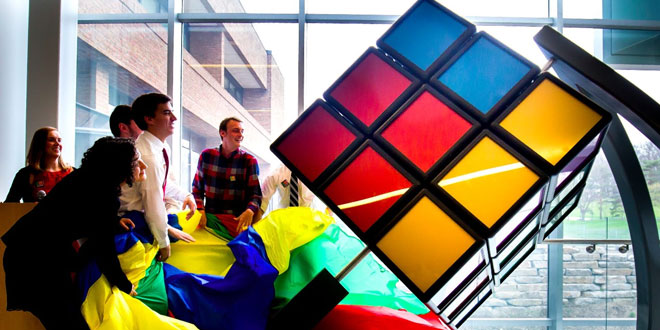 Photo: A giant Rubik’s Cube newly installed on the University of Michigan’s North Campus is the world’s largest hand-solvable, stationary version of the famous puzzle. The 1,500-pound, mostly aluminum apparatus was unveiled on the southwest corner of the second floor of the G.G. Brown Building. It was imagined, designed and built by two teams of mechanical engineering undergraduate students over the course of three years.

The Guinness World Records world record for the largest Rubik’s Cube mosaic measures 277.18 m² (2,983.54 ft²) and was created by Josh Chalom (USA) and unveiled at One Central Macau, China on 7 December 2012.

Guinness World Records also recognized the world record for the largest Rubik’s Cube solved by a robot is a 9x9x9 cube tackled successfully by MultiCuber 999, an ARM-powered LEGO robot built by David Gilday (UK) and demonstrated at the Big Bang Fair in the Birmingham NEC, West Midlands, UK, on 15 March 2014.

It was imagined, designed and built by two teams of mechanical engineering undergraduate students over the course of three years.

“Now North Campus has an iconic cube of our own,” said mechanical engineering student and cube co-developer Ryan Kuhn, referring to the spinning Tony Rosenthal sculpture on U-M’s central campus.

The colorful, new cube is meant to be touched and solved. The students worked hard to figure out a movement mechanism that would enable that. They realized they couldn’t simply scale up the approach a handheld cube relies on because the friction would be too great. So to keep friction minimal, they devised a setup that utilizes rollers and transfer bearings.

“This is a truly amazing and unique kinematic mechanism that functions as a Rubik’s cube,” said Noel Perkins, the Donald T. Greenwood Collegiate Professor of Mechanical Engineering and adviser to the students.

The first team of four students—Kelsey Hockstad, Dan Hiemstra, Harris and Wright—worked on it for two years and graduated in 2016. The cube still needed fine tuning, as well as a stand.

They convinced another cohort—Jason Hoving, Ryan Kuhn and Doug Nordman—to continue the project. The original team stayed involved to guide them.

Since it was invented in 1974, the Rubik’s cube has become the world’s best-selling puzzle game—one that introduced and promoted mathematical thinking to generations. Solving it involves recognizing patterns and developing and implementing algorithms.

“The point of making a Rubik’s Cube so large was primarily to introduce teamwork to the puzzle-solving process,” Harris said. “Real world problems can rarely be solved without the cooperation of several different people. It’s a simple idea, but one that is crucial to science, technology, engineering and math fields.”