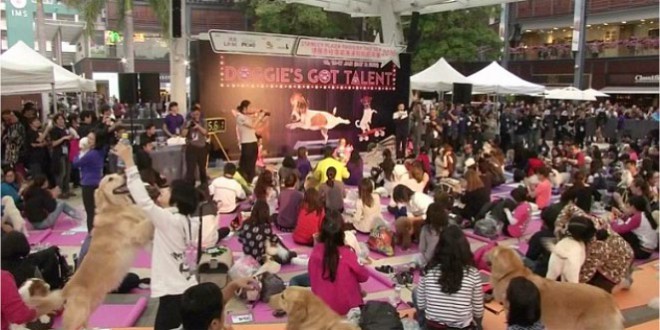 Hong Kong, China – January 19, 2016 – A group of 270 dog owners have broken the Guinness World Records world record for the largest dog yoga session; led by ‘doga’ teacher, Suzette Ackerman, the participants massaged, twisted and stretched their furry friends in a series of poses.

Photo: The world’s biggest dog yoga class was led by doga teacher Suzette Ackerman. For half an hour, 270 owners practiced by massaging, twisting, and stretching their four-legged friends in a variety of yoga poses, along with the odd bark, of course.

The Guinness World Records world record for the longest yoga chain involved 3849 participants at an event organised by the Kshatriya Vidhyasala Managing Board (India) in Tamil Nadu, India, on 14 November 2014. The length of the chain measured 3852m.

Guinness World Records also recognized the world record for the largest prenatal yoga class involved 553 participants and was achieved by Shenyang Madein Women’s and Children’s Hospital (China) in Shenyang, Liaoning, China on 10 May 2015.

Participants massaged and stretched their pets in various poses during the ”doga” (dog yoga) class.

Ackerman said doga is a great way to bond and relax with the pets in fast-paced cities like Hong Kong.

“I think it’s important. I think today they had fun. And people in Hong Kong are very busy with work. Like 24/7 working. A lot of them have pets but usually it’s the helpers that take the dogs out for walks,” Ackerman was quoted as saying by International Business Times.

The previous Guinness World Records world record for largest ‘doga’ class was set in San Diego on January 25, 2015 with 265 people and their pups participating.