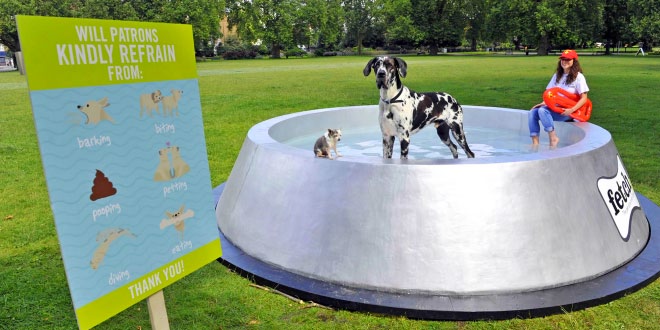 LONDON, UK – August 7, 2016 – Fetch.co.uk, Ocado’s online pet store, has built the world’s largest dog bowl, in a bid to educate the country about keeping our dogs hydrated in the summer; the dog bowl stretches 4.5m in diameter, stands at 1m tall and can hold up to 2000 litres of water, thus setting the new world record for the largest dog bowl.

Photo: The super bowl, which has been made by Fetch.co.uk , is a whopping 4.5m in diameter, stretches 1m tall and can hold up to 2000 litres of water.

The world’s largest dog bowl stretches 4.5m in diameter, stands at 1m tall and can hold up to 2000 litres of water, providing an ample thirst quencher for pooches this summer.

It was unveiled at Kennington Park in South London with plans to tour the giant dog bowl across the UK.

Lauren Vrsalovich, Fetch’s in house vet, commented, “It can be difficult to decide how much water you should give your dog. Generally speaking the average dog should drink 20-70 millilitres of water for every kilogram they weigh.

“For example a 10kg dog should drink between 200 & 700ml in a 24 hour period. But this will vary between individuals. The environmental temperature and water lost through activity and/or panting etc will have a major influence on this number.

“It’s a good idea to get used to what is normal for your pet so you can keep an eye out for any dramatic increases or decreases in fluid intake.”