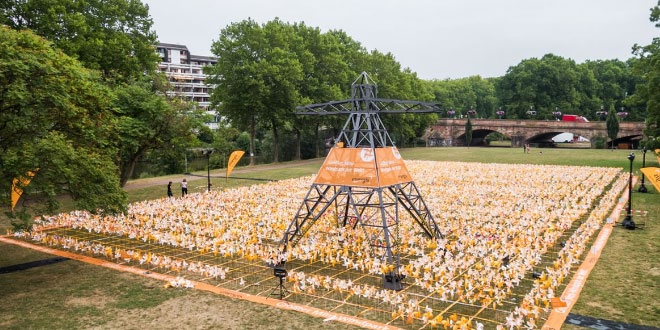 Saarbrücken, Germany – February 20, 2016 – A total of 12268 children from 35 kindergartens, 43 schools and 42 clubs designed 12,268 toy windmills who were placed in Saarbrücken at the Saar-Spektakel, the biggest public festival in the region, by the energy concern energis Gmbh, thus setting the new world record for the Largest display of toy windmills (pinwheels).

The Guinness World Records world record for the earliest recorded windmills were used for grinding corn in Iran in the 7th century AD. The oldest Dutch mill is the tower-mill at Zeddam, Gelderland, built c.1450.

Guinness World Records also recognized the world record for the largest collection of wind up toys; it is 1,042 toys and belongs to William Keuntje (USA), in Landing, New Jersey, USA, as of 26 November 2011.

In april 2015 energis GmbH (a huge energy concern in Saarbrücken, Saarland, Germany) called up for a toy windmills world record. The main target of this campain was to inspire children for renewable energy, espacially wind.

The main target of this campaign was to inspire children for wind energy, moderator Marie-Elisabeth Denzer turned out with the concerned parties.

During the period April the 11th through August the 09th, 35 kindergartens, 43 schools, 42 clubs and many more designed individual toy windmills.

The event final was on August 09th 2015 at the event Saar-Spektakel, the biggest public festival in the region (Saarland).

Conclusion: “Children and wind energy are our future”

The successful record attempt was organized by the PR firm friends event GmbH.