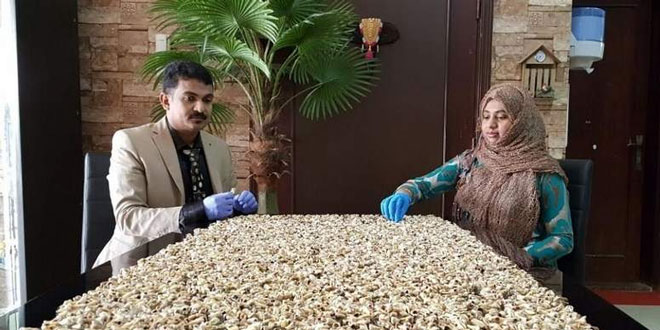 Guinness World Records also recognized the world record for the most people brushing their teeth simultaneously in a single venue; it is 16,414, achieved by My Dental Plan and Delhi Public School (both India), in Karnataka, India, on 7 January 2016.

The dental surgeon from Thiruvananthapuram district of Kerala has preserved almost all the teeth he has plucked, The Khaleej Times reports.

He preserves all teeth in the hospital and keeps them in hydrogen peroxide. “I also clean them with disinfectant.

Nizar said he came to the Capital at the age of 26 and the locals weren’t comfortable seeing a young and inexperienced doctor.

“So, I started preserving teeth just to convince them. It’s more than 10,000,” the dental surgeon said.

“Some patients take it back for religious reasons,” said the doctor, who is working in Abu Dhabi for 15 years.

According to Dr Nizar, maintaining healthy teeth is not difficult. Aerated drinks harm the teeth in the worst way. Even tea and coffee are harmful.

Nizar’s wife Simi Nizar is also a dentist and has joined her husband by collecting teeth by herself, although she doesn’t have a big collection of teeth.