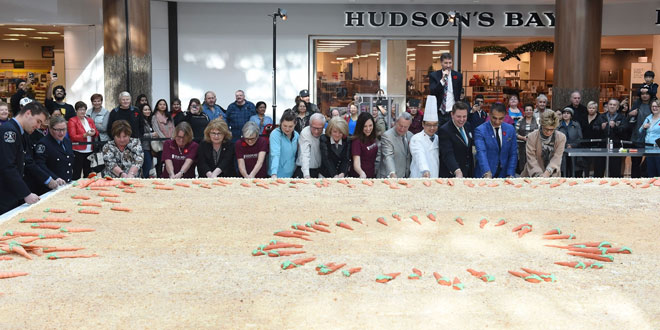 The Guinness World Records world record for the heaviest carrot weighs 9.1 kg (20 lb) and was grown by Peter Glazebrook (UK) as verified at the Harrogate Flower Shows Autumn Show on 12 September 2014.

Guinness World Records also recognized the world record for the longest carrot; it measures 6.245 m (20 ft 5.86 in) and was grown by Joe Atherton (UK), as verified at the UK National Giant Vegetables Championship, in Malvern, UK, on 23 September 2016.

The assembly of the cake took place over a three-day period between Sunday, November 6 and Tuesday, November 8.

A large crowd of loyal shoppers gathered to witness the announcement and the first 1,000 visitors to enjoy a slice of the anniversary cake were also given a chance to take home ‘karats’ of their own with a grand prize of a $1,000 shopping spree to a Guildford Town Centre Jewellery store of their choice.

The official cutting of the record-setting cake was a community affair, including Surrey dignitaries, members of the Guildford Town Centre Walking Club, and representatives from Scotiabank and Orange Julius, who were among the original retailers when the mall opened this day in 1966.

Guildford Town Centre also announced that they had donated a large portion of the World Record setting cake to NightShift Street Ministries, and will also be donating $50,000 to the Surrey Fire Fighters’ Charitable Society.