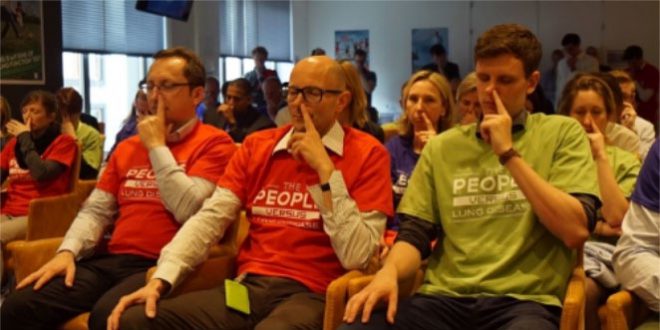 Amsterdam, Netherlands – May 6, 2016 – Taking a break from their day jobs in areas such as finance, marketing, human resources and sales, over 600 employees from healthcare company Teva from across Europe simultaneously spent half an hour setting the new world record for the Largest Breathing Lesson.

Photo: Healthcare company Teva, which has its European headquarters in Amsterdam, is now recognised as the record holder for “The World’s Largest Breathing Lesson”.

Guinness World Records also recognized the world record for the largest oral hygiene lesson; it is 1,507 and was organized by Organizatia Studenteasca De Medicina Dentara (Romania) in Targu Mures, Romania, on 16 May 2015.

Taking a break from their day jobs in areas such as finance, marketing, human resources and sales, colleagues from across Europe simultaneously spent half an hour breathing their way to a World Record title through an international breathing class.

The breathing lessons were held at many of the company’s European sites and led by fully qualified yoga teachers.

“This World Record attempt demonstrates our commitment to respiratory care and represents the significant change that we can make together,” said Luca Frangoni, Head Respiratory Europe.

To be eligible to achieve the World Record title, there had to be a minimum of 25 people at each Teva site, stewards and independent adjudicators, and all of the classes were recorded to verify the record attempt.