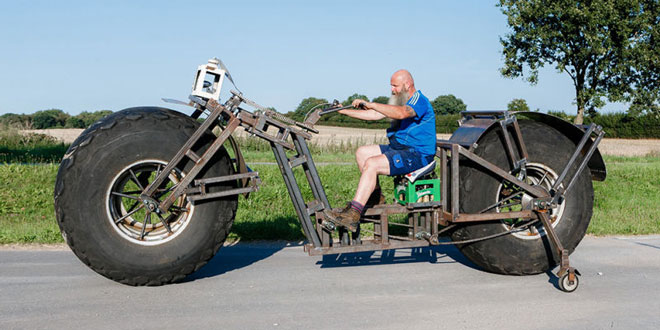 Berlin, Germany – September 11, 2016 – Using giant tires from an industrial fertilizer spreader and scrap steel, Frank Dose has built a bicycle weighing 940 kilograms (2,072 pounds) and with tyres more than 1.5 metres in diameter, it sets the new world record for the Heaviest rideable bike.

Guinness World Records also recognized the world record for the longest bicycle is 41.42 m (135 ft 10.7 in) long, and was achieved by Santos and University of South Australia (both Australia) as measured and ridden in Adelaide, Australia, on 17 January 2015.

He hit a top speed of 5 kilometres an hour during his record-breaking attempt.

The bike weighs more than 2000-pound and the creator’s purpose is not aimed at taking part in any race competition, rather setting a world record. Frank Dose constructed his bicycle from scrap steel, and fitted it with giant, 5-foot diameter tires that once belonged to an industrial fertilizer spreader.

According to the AP, Dose’s bike, in spite of the burder of the 5-foot in diameter tires, is “surprisingly easy to ride.”