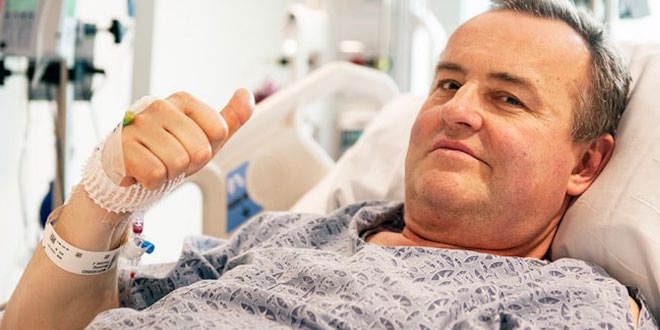 Boston, Massachusetts, USA – May 19, 2016 – Massachusetts General announced that Thomas Manning, 64, a bank courier from Massachusetts, has received a penis from a deceased donor and become the third penile transplant patient in history — the first of his kind in the United States.

Photo: A hospital in Boston has become the first in the US to perform a successful penis transplant, doctors said, calling the operation “a surgical milestone”. Thomas Manning, 64, received the donated organ three years after his penis was amputated due to penile cancer.

The Guinness World Records world record for the first skull and scalp transplant to be received by a patient is James Boysen (USA) in Houston Methodist Hospital, Houston, Texas, USA on 22 May 2015.

Guinness World Records also recognized the world record for the largest gathering of organ transplant recipients; it is 314 participants and was achieved by the Donate Life Run/Walk (USA), at the campus of California State University, Fullerton, California, USA, on 30 April 2016.

Thomas Manning, 64, whose penis was removed in 2012 due to penile cancer, is recovering well and showing no signs of rejecting the transplant, his surgeons said.

“Today I begin a new chapter filled with personal hope and hope for others who have suffered genital injuries, particularly for our servicemembers who put their lives on the line and suffer serious damage as a result,” Manning said in a statement.

The surgeons who led the 15-hour procedure, Curtis Cetrulo and Dickens Ko, said they were “cautiously optimistic” Manning will regain full urinary and sexual function.

More than 3½ years of research and teamwork among dozens of specialists in plastic and reconstructive surgery, urology, psychiatry, infectious disease, nursing and social work culminated in the transplant, Ko said.

A team of South Africa surgeons performed the world’s first successful penis transplant in a nine-hour operation in December 2014. Stellenbosch University said last spring that the patient had regained full function in the transplanted organ.