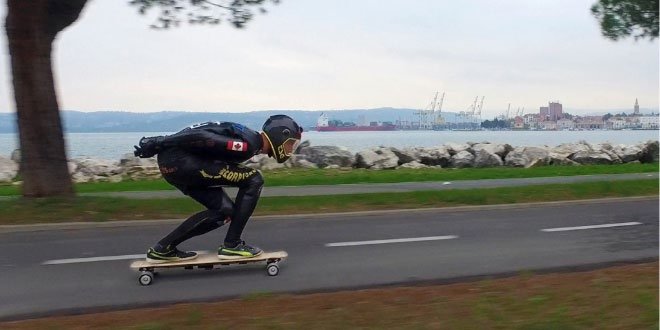 Piran, Slovenia – March 1, 2016 – Mischo Erban, 32, who describes himself as a “human Formula 1 car,” set a new World Record when he reached 59.55mph on an modified electric skateboard.

Photo: Daredevil, Mischo Erban, raced into the World Records book with the fastest speed on an electric skateboard. The Canadian-born racer hit speeds of 95.83 kph (59.55 mph) on a modified longboard at Portorož airport in Piran, Slovenia.

Guinness World Records also recognized the world record for the longest journey by skateboard was 12,159 km (7,555 miles) and was completed by Rob Thomson (New Zealand) starting in Leysin, Switzerland on 24 June 2007 and finishing in Shanghai, China, on 28 September 2008.

The Canadian-born racer hit speeds of 95.83 kph (59.55 mph) on a modified longboard at Portorož airport in Piran, Slovenia. The board the man used was a modified NEXTBoard created by a company called Next Generation Vehicles.

Slovenian tech startup Next Generation Vehicles (NGV) has been developing the four-wheel-drive motorized longboard, Nextboard, for the last two years. The vehicle is powered by four Scorpion motors, one on each wheel, and two Tattu 6S batteries in series.

Tone Gorup, chief engineer and designer of the Nextboard, was inspired to create the after finding a huge 6 kg computer hard drive from the early 90s with a motor inside that he knew would be able to power a longboard.

The record was attempted on a completely flat surface, with the speed measured over 100 meter distance.