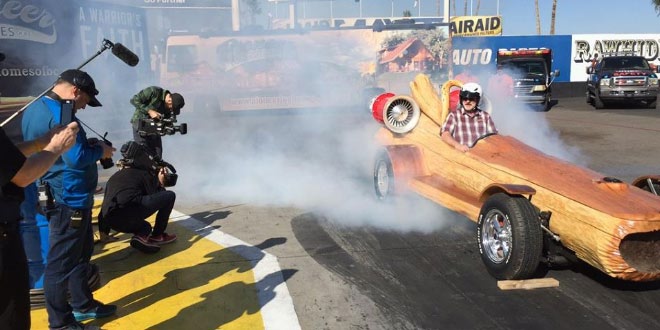 Williams Lake, Canada – February 7, 2016 – The founder and owner of Pioneer Log Homes of B.C. and a star of HGTV Canada’s Timber Kings, Bryan Reid Sr., has set a World Record for “fastest motorized log;” the “Cedar Rocket,” powered by twin, 20-horsepower electric turbines, can do about 225 km/h “on paper,” but maxed out at 90 for its record on the quarter mile.

Photo: Bryan Sr. burns a little rubber on the racetrack. — in West Chandler, Arizona. Williams Lake, B.C.-based Pioneer Log Homes has just set the World Record for “fastest motorized log” by piloting a twin-turbine-driven vehicle made from a tree to an incredible 90 km/h (56 mph) down a quarter-mile race track.

The Guinness World Records world record for the Fastest sofa was set by Glenn Suter (Australia), who achieved a speed of 163.117 km/h (101.36 mph) whilst driving a motorised sofa, at an event organised by The Monkeys for Ice Break (Australia), at Camden Airport, New South Wales, Australia, on 26 September 2011.

Guinness World Records also recognized the world record for the fastest lawnmower is 214.967 km/h (133.57 mph) and was constructed and raced by Per-Kristian Lundefaret (Norway) at Torp Sandefjord Airfield, Vestfold, Norway, on 5 November 2015.

The Cedar Rocket was built with the goal of raising awareness and funds for veterans’ charities.

Parts and labour were donated by Reid’s firm, master mechanic Gerald Overton and one of Reid’s customers at Buffalo Turbines in New York. The car’s body was chiselled and chainsawed from a 240-year-old Western red cedar from the Bella Bella area, which had a “very unusual shape, much like a rocket ship,” Reid said.

The “Cedar Rocket,” powered by twin, 20-horsepower electric turbines, can do about 225 km/h “on paper,” but maxed out at 90 for its record on the quarter mile, Reid said. “The turbines just scream. At the end of the quarter mile, when we were about to shut down, it sounded like a jet taking off.”

The Cedar Rocket sits on a Mazda RX-8 frame, and has an independent suspension and disc brakes. A differential driven by a 35-horsepower, direct-drive electric motor gives it some extra kick. The whole thing weighs 1,000 kilograms, about 240 of which are batteries.