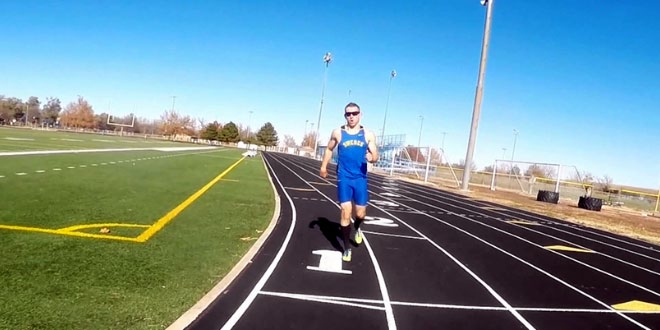 The Guinness World Records world record for the fastest half marathon run backwards is 1 hr 40 min 29 sec by Achim Aretz (Germany) at the 19th TUSEM August Blumensaat in Essen, North Rhine-Westphalia, Germany, on 28 November 2009. Of the 464 total participants in the marathon (all of whom ran forwards except Aretz), Aretz finished in 123rd place overall.

Guinness World Records also recognized the world record for the Fastest run backwards one kilometre, set by Thomas Dold (Germany), who ran 1,000 metres backwards in a time of 3 min 36.07 sec at Messkirch, Germany on 13 July 2003.

Coach Yoder finished his second season as the head cross country coach, and is in his first year as the indoor and outdoor track and field head position. However, as a former collegiate athlete, running at Fort Hays from 2004-2009, Yoder continues to set goals for himself to achieve, while helping his athletes set and achieve their own.

Yoder has always been a goal oriented person. Whether as a runner or coach He is always setting new benchmarks to achieve. He hopes that eventually backwards running will be added as an Olympic event. However, for now he is set to run in July at the World Championships.