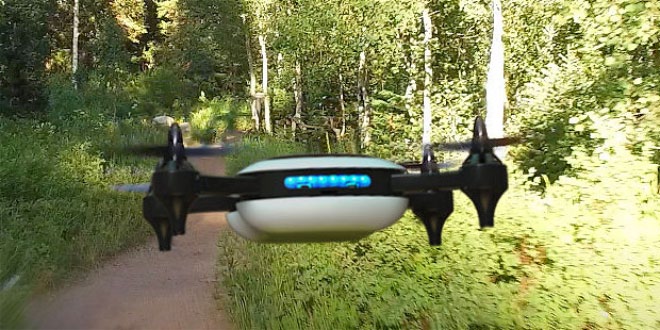 Salt Lake City, Utah, USA – July 27, 2016 – Teal (founder and CEO George Matus Jr.), introduced the world’s fastest production drone; the drone can fly at 70 mph in all weather conditions and has reached a top speed of 85 mph in favorable conditions; it can withstand 40 mph winds, is built to run apps, and can be controlled using a smartphone, tablet or hobby controller, according to the World Record Academy.

Photo: Teal is the world’s fastest production drone since it has a speed of up to 112 km/h. It has hit a speed of around 85 mph in testing. Weighing just 730 gram, this smart craft takes off at 70 mph. Teal can also record 4K video, live stream at 720p and take 13MP photos.

The Guinness World Records world record for the fastest lawnmower is 214.967 km/h (133.57 mph) and was constructed and raced by Per-Kristian Lundefaret (Norway) at Torp Sandefjord Airfield, Vestfold, Norway, on 5 November 2015.

Guinness World Records also recognized the world record for the Fastest sofa, set by Glenn Suter (Australia), who achieved a speed of 163.117 km/h (101.36 mph) whilst driving a motorised sofa, at an event organised by The Monkeys for Ice Break (Australia), at Camden Airport, New South Wales, Australia, on 26 September 2011.

The drone can fly at 70 mph in all weather conditions and has reached a top speed of 85 mph in favorable conditions.

It can withstand 40 mph winds, is built to run apps, and can be controlled using a smartphone, tablet or hobby controller. It comes with a one-year warranty.

Teal is the brainchild of George Matus, who has been developing drones since he was 11 years old.

Teal is taking preorders for the US$1,300 drone. The first drones will ship before Christmas, Teal’s Matus told TechNewsWorld. General availability is slated for early 2017.

The drone weighs 730 gm, has a payload capacity of 500 gm, and is made from carbon-infused polycarbonate plastic. Connectivity options include three USB 2 ports, one USB 3 port, and one HDMI 2.0 port. Its maximum range exceeds 5,000 feet.

Its 13-MP camera has electronic stabilization and can record videos in up to 4K at 24 fps. It can provide live video streams of up to 720p.  The camera supports all SD card types and is compatible with virtual reality headsets. The drone has a 64-bit ARM A57 CPU, a 1 TFLOP/s 256-core Nvidia TX1 GPU, 16 GB of eMMC storage, SDIO and SATA storage.