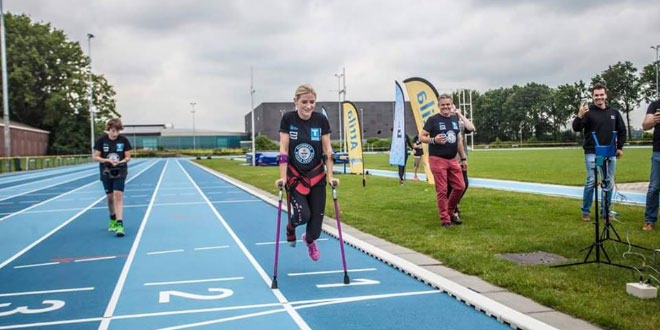 Tilburg, Holland – July 1, 2016 – Nikki ‘The Fighter’ Bradley broke a Guinness World Record to become the fastest woman to complete a 5K on crutches; the successful record attempt took place in Tilburg, Holland, where she recorded a time of 44:21, smashing the old record by more than five-and-a-half minutes.

The Guinness World Records world record for the fastest 5 km on crutches (one leg, male) is 44 min 17 sec and was achieved by Sivananda Rajananda (Malaysia) at the UCLA True Bruin Move & Groove 5K Run/Walk, Los Angeles, USA, on 8 March 2015.

Guinness World Records also recognized the world record for the fastest 5 km on crutches (one leg, female); it is 49 min 53.37 sec and was achieved by Lisa Hughey (USA) at the 2015 Davis Stampede in Davis, California, USA, on 8 February 2015.

Cancer survivor Nikki Bradley has beaten the Guinness World Records world record for the fastest 5km on crutches. The Donegal native arrived back from Holland as a World Record-holder after completing the challenge in 44 minutes, 21 seconds. The previous record was 49 minutes, 53 seconds.

On the same day at the same time, and on the same track, adapted athlete Michael Robbert Brans also broke the same record in the male category.

Nikki was diagnosed with Ewing’s Sarcoma, a rare form of bone cancer, at the age of 16. In 2013, she learned that she would remain on crutches permanently and doctors have recently told her that she will lose her right leg.

She has refused to let anything hold her back. Already this year she has climbed Donegal’s Mount Errigal, conquered an Icelandic glacier and abseiled down a lighthouse.