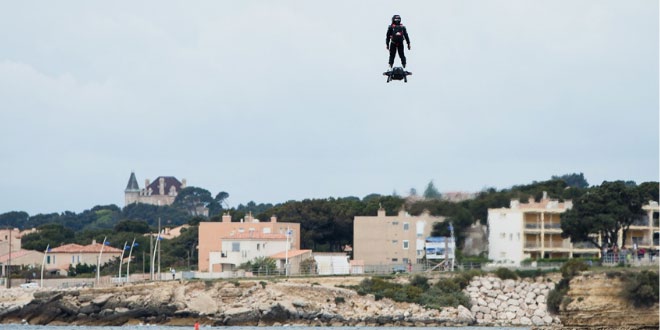 Paris, France – May 2, 2016 – Franky Zapata sets a new World Record for farthest hoverboard flight, after flying his Flyboard Air for a distance of 2,252 meters at an event in Sausset-les-Pins, France.

The Guinness World Records world record for the farthest flight by hoverboard is 275.9 m (905 ft 2 in) and was achieved by Alexandru Duru (Canada) at Lake Ouareau in Quebec, Canada, on 25 August 2014.

Guinness World Records also recognized the world record for the greatest distance flown in a tandem paraglider without landing is 356.2 km (221.3 miles), by Richard Westgate and Phillip Bibby from Vosburg to Krompoort Farm, South Africa, on 7 December 2006.

Before Zapata even achieved the feat with his creation, known as a Flyboard Air, video of a test flight racked up more than 3.7 million views on YouTube.

Zapata is also a record holder for doing 26 backflips while on water jet pack within just one minute.