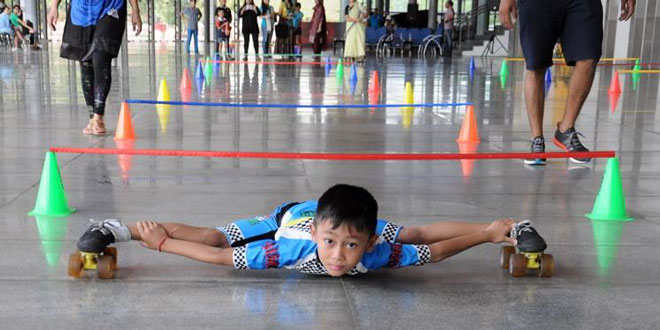 Photo: A nine-year-old Indian boy from Manipur, northeast India, has set a new World Record in limbo skating. Tiluck Keisam skated beneath 146 bars over a 145-meter stretch in just 56.01 seconds.

The Guinness World Records world record for the longest limbo skating is 125 m (410 ft 1 in) and was achieved by Gagan Sathish (India), in Bangalore, Karnataka, India, on 11 March 2016.

Guinness World Records also recognized the world record for the farthest distance limbo-skating under cars; it is 65.283 m (214 ft 2.2 in) and was achieved by Om Swaroop Gowda (India) at Orion Mall, Bengaluru, Karnataka, India, on 17 July 2016.

His new record is all the more astonishing because he lowered the bars from the required height of 35cm to 28cm above the ground.

His parents, Kiesam Ricky Singh, 42, and Pravabati Takhellambam, 42, said in an interview that he started practicing his runs at the age of five.

His father Singh said: “We are very happy and proud of our son. He is very unique. People get stunned when they see his flexibility.”

Limbo skating is a very popular sport in India; it started with India’s first world record set by Aniket Chindak and recognized by the World Record Academy.