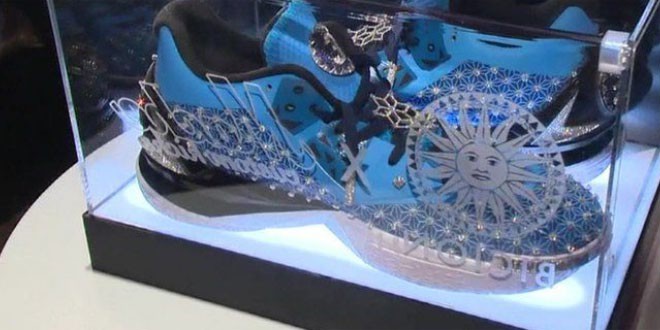 Photo: Luxury haute couture brand Bicion and designer Dan Gamache have produced a pair of the world’s most expensive trainers, costing $4 million. The sports shoes are adorned with hundreds of diamonds and sapphires.

The Guinness World Records world record for the Most expensive pair of trainers (sneakers) was set by Ken Courtney (USA), founder of fashion label Ju$t Another Rich Kid, who created a pair of high-top Nike Dunks dipped in 18-garat gold as part of a fashion show in New York, USA, in 2007. Five pairs were made, costing $4,053 (£2,702) each.

Guinness World Records also recognized the world record for the largest collection of sneakers / trainers; it consists of 2,388 pairs and is owned by Jordy Geller (USA) based in Las Vegas, Nevada, USA, as of 17 May 2012. Jordy has termed the warehouse where the sneakers are based the ‘ShoeZeum’ and he owns the largest and most comprehensive collection of Nikes in the world. All of the shoes are brand new and in their original boxes and estimated to be worth over a million dollars.

The diamond-encrusted trainers were unveiled in New York.

They will be auctioned off to benefit the Soles4Souls – a US-based charity that collects new and used shoes and redistributes them through direct donations to people in need.

The organisation has donated 26 million pairs of trainers in over a hundred countries since 2006.