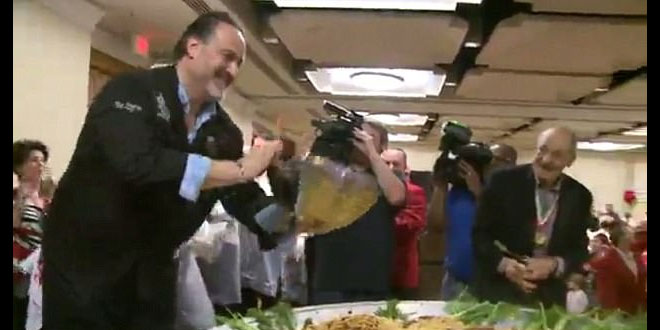 New Orleans, Louisiana, USA – March 28, 2017 – Piled high with 500lbs of spaghetti, 150 gallons of sauce and 50lbs of cheese, the a giant pasta bowl made its annual appearance for St. Joseph’s Day celebrations; spanning eight feet in diameter, it sets the new world record for the Biggest Pasta Bowl.

Photo: New Orleans Italian American Marching Club, has served up the biggest bowl of pasta ever.

The Guinness World Records world record for the largest bowl of pasta weighed 7,900 kg (17,417 lb) and was achieved by Czanieckie Makarony, Gmina Miejska Krakow and Magillo Restaurant (all Poland), in Krakow, Poland, on 24 October 2015.

The big bowl is part of the Italian American St. Joseph Society’s yearly celebration. The club has done this for 47 years now, according to WGNO.

In addition to the noodles, meatless gravy and mounds of cheese, the dish also contained sardines, pine nuts, fennel and raisins, in honor of St. Joseph’s Day, The Daily Mail reports.

It marked the 47th year the Italian American St. Joseph Society has done the massive spaghetti feast, as New Orleans, a port city for immigrant Sicilians, paid homage to the saint.