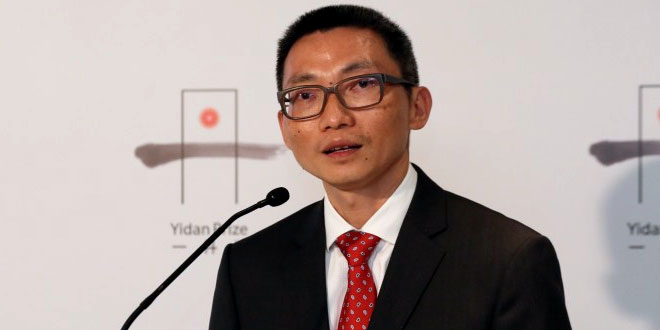 Photo: Charles Chen Yidan, founder of the Yidan Prize gave a speech at the press conference. The Prize aims to recognize and support change makers for their most forward looking innovation that can create sustainable impacts on education systems for a better future.

The Guinness World Records world record for the Greatest prize money for science and technology was set by the one million euro (then approximately £667,000; $1.3 million) Millennium Technology Prize, which is awarded every two years in recognition of outstanding contributions to world science and technology.

Guinness World Records also recognized the world record for the Largest single first prize in an eSports tournament, set by The Chinese eSports team Wings Gaming, which scooped a record-breaking $9,139,002 (£7,055,020) when they took first place at the sixth The International Dota 2 Championships on 8–13 August 2016 in the KeyArena in Seattle, Washington, USA.

Charles Chen Yidan, who co-founded China’s internet company, Tencent, wants to use the prize to scale up innovative education research projects and replicate them across the world.

Universities, governments and think tanks have reacted enthusiastically to the prize, and leading US institutions like Harvard and MIT have already submitted several nominations.

The prize-winners will be chosen by an independent committee of educational experts led by Dr Koichiro Matsuura, former director-general of Unesco.

Nominations close at the end of March and the winners will be announced in September.

Mr Chen, now aged 45, became one of China’s richest men after co-founding Tencent in 1998. In 2013, he stepped down to focus on educational philanthropy. His interest in education came from his family. His grandmother was illiterate but insisted that Mr Chen’s father got a good education.

This latest education prize is now the most valuable, the BBC reports.

The Global Teacher Prize, run by the Varkey Foundation, gives $1m (£830,000) annually to a teacher who has made an “outstanding contribution” to education.

The Broad Prize for Urban Education, which ran from 2002 to 2014, gave $1m every year to a school district in the US that significantly improved the academic performance of low-income and minority students.