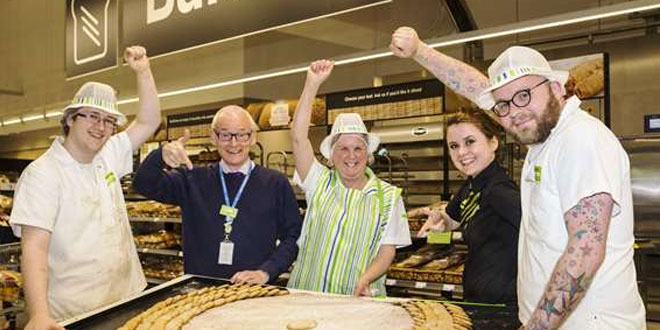 Devon, United Kingdom – April 17, 2017 – Bakers at Asda’s Barnstaple superstore have made a giant Easter biscuit; it has has a 31 inch diameter (79cm), a whole 25 inches (64cm) bigger than the regular sized Easter biscuit, thus setting the new world record for the Biggest Easter biscuit.

Guinness World Records also recognized the world record for the largest decorated Easter egg; it was built by Freeport in Alcochete, Portugal was 14.79 m (48 ft 6 in) long and 8.40 m (27 ft 6 in) in diameter when measured on 8 March 2008.

Made from flour, butter, egg yolk, baking powder and sugar, the lightly-spiced currant biscuits are often decorated by children in the run up to Easter, according to Devonlive.com.

Andy Felix, store manager at Asda Barnstaple, said: “We got wind of the Easter biscuit world record being set by Bodmin and thought a bit of healthy competition couldn’t hurt.

“The Easter biscuit is very popular in this part of the country and we take our traditions very seriously, so obviously wanted the world biggest Easter biscuit title for ourselves. We couldn’t be happier that we’ve made the bigger biscuit – that’s just the way the cookie crumbles Asda Bodmin.”