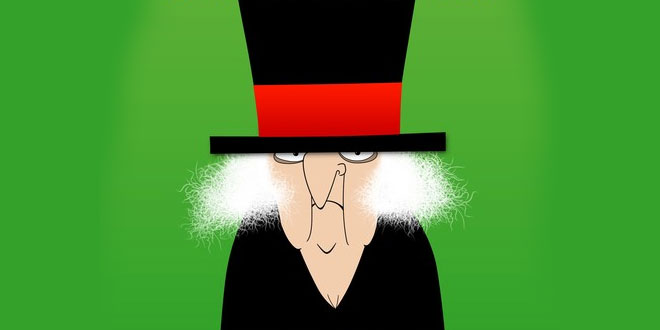 Scrooge and the Ghost of Christmas Present stood in the city streets on Christmas morning, where (for the weather was severe) the people made a rough but brisk and not unpleasant kind of music, in scraping the snow from the pavement in front of their dwellings, and from the tops of their houses, whence it was mad delight to the boys to see it come plumping down into the road below, and splitting into artificial little snowstorms.

The house fronts looked black enough, and the windows blacker, contrasting with the smooth white sheet of snow upon the roofs, and with the dirtier snow upon the ground, which last deposit had been ploughed up in deep furrows by the heavy wheels of carts and wagons; furrows that crossed and recrossed each other hundreds of times where the great streets branched off, and made intricate channels, hard to trace, in the thick yellow mud and icy water. The sky was gloomy, and the shortest streets were choked up with a dingy mist, half thawed, half frozen, whose heavier particles descended in a shower of sooty atoms, as if all the chimneys in Great Britain had, by one consent, caught fire, and were blazing away to their dear heart’s content. There was nothing very cheerful in the climate or the town, and yet was there an air of cheerfulness abroad that the dearest summer air and brightest summer sun might have endeavored to diffuse in vain.

For the people who were shoveling away on the housetops were jovial and full of glee, calling out to one another from the parapets, and now and then exchanging a facetious snowball–better-natured missile far than many a wordy jest–laughing heartily if it went right, and not less heartily if it went wrong. The poulterers’ shops were still half open, and the fruiterers’ were radiant in their glory. There were great, round, potbellied baskets of chestnuts, shaped like the waistcoats of jolly old gentlemen, lolling at the doors, and tumbling out into the street in their apoplectic opulence.

There were ruddy, brown-faced, broad-girthed Spanish onions, shining in the fatness of their growth like Spanish friars, and winking, from their shelves, in wanton slyness at the girls as they went by, and glanced demurely at the hung-up mistletoe. There were pears and apples, clustering high in blooming pyramids; there were bunches of grapes, made, in the shop-keeper’s benevolence, to dangle from conspicuous hooks, that people’s mouths might water gratis as they passed; there were piles of filberts, mossy and brown, recalling, in their fragrance, ancient walks among the woods, and pleasant shuffling ankle deep through withered leaves; there were Norfolk biffins, squab and swarthy, setting off the yellow of the oranges and lemons, and, in the great compactness of their juicy persons, urgently entreating and beseeching to be carried home in paper bags and eaten after dinner. The very gold and silver fish, set forth among these choice fruits in a bowl, though members of a dull and stagnant-blooded race, appeared to know that there was something going on; and, to a fish, went gasping round and round their little world in slow and passionless excitement.

The grocers’! oh, the grocers’! nearly closed, with perhaps two shutters down, or one; but through those gaps such glimpses! It was not alone that the scales descending on the counter made a merry sound, or that the twine and roller parted company so briskly, or that the canisters were rattled up and down like juggling tricks, or even that the blended scents of tea and coffee were so grateful to the nose, or even that the raisins were so plentiful and rare, the almonds so extremely white, the sticks of cinnamon so long and straight, the other spices so delicious, the candied fruits so caked and spotted with molten sugar as to make the coldest lookers-on feel faint, and subsequently bilious. Nor was it that the figs were moist and pulpy, or that the French plums blushed in modest tartness from their highly decorated boxes, or that everything was good to eat and in its Christmas dress; but the customers were all so hurried and so eager in the hopeful promise of the day that they tumbled up against each other at the door, crashing their wicker baskets wildly, and left their purchases upon the counter, and came running back to fetch them, and committed hundreds of the like mistakes, in the best humor possible; while the grocer and his people were so frank and fresh that the polished hearts with which they fastened their aprons behind might have been their own, worn outside for general inspection, and for Christmas daws to peck at, if they chose.

But soon the steeples called good people all to church and chapel, and away they came, flocking through the streets in their best clothes, and with their gayest faces. And at the same time there emerged from scores of by-streets, lanes, and nameless turnings, innumerable people, carrying their dinners to the bakers’ shops. The sight of these poor revellers appeared to interest the Spirit very much, for he stood, with Scrooge beside him, in a baker’s doorway, and, taking off the covers as their bearers passed, sprinkled incense on their dinners from his torch. And it was a very uncommon kind of torch, for once or twice when there were angry words between some dinner-carriers who had jostled each other, he shed a few drops of water on them from it, and their good-humour was restored directly. For they said it was a shame to quarrel upon Christmas Day. And so it was! God love it, so it was! 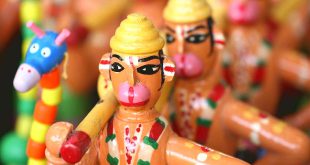 The story of the birth of Hanuman goes thus: Vrihaspati had an attendant called Punjikasthala, …