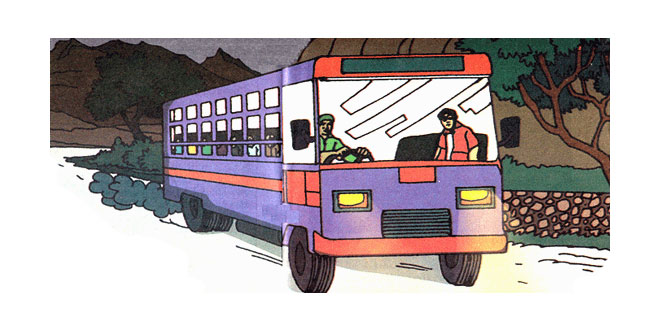 A bus was wheeling away towards its destination. It was 11 o’clock at night. Modern Public School has arranged a school tour to Nainital for class 8 students. Four teachers were also accompanying them.

Children were very happy. Nobody was feeling sleepy even at midnight.

They were enjoying themselves joking and singing songs.

Suddenly, the bus started shaking badly. The driver somehow took control of the bus and halted in to the side of the road. Then he got down to check the engine.

“The engine has developed some snag,” driver answered. He checked but could not get any clue about the snag.

“We will have to send a helper to Bareilly to call a mechanic. It will take a long time,” driver said.

He stopped a bus coming from the opposite direction and giving his helper some instruction told him to bring a mechanic.

It was pitch dark all around. Even children’s faces hung along with those of the teachers. They all sat quiet in the bus for some time.

“Oh look! What is there at the banks of the lake? How strangely are those shining stones jumping?” looking out of the window Ravi said.

“Yes, they are,” all looked towards the lake.

They actually could see shining stones jumping and dancing.

“How strange is this”? Ankur Sir, the science teacher wondered.

“Probably sir, it is some ghost working. Neither do stones shine this way nor they dance like this,” frightened driver said.

The children got scared at hearing him.

“Shut up, you are a fool. Who believes in ghosts. We must find out this secret,” Mayank Sir, who taught Biology, said and started getting down from the bus.

Driver wanted to stop him but with the fear of getting shouted at, he did not.

Seeing the teacher getting down from the bus, others too were encouraged.

The 4 teachers and some courageous children got down and walked towards the lake. They carried two torches.

In the light of the torch, when they reached the banks of the lake, they were taken aback. What they were thinking to be stones were actually frogs that were jumping.

“But how are these frogs shining”? Ankur Sir wondered.

“I will tell you. These frogs have swallowed glowworms,” Mayank explained.

“Actually the membrane of their stomach is transparent. That is why they are shining.”

Children were listening carefully to their teachers. They were surprised hearing the fact.

If their teachers have not investigated, no one would have known the secret of the shining stones.