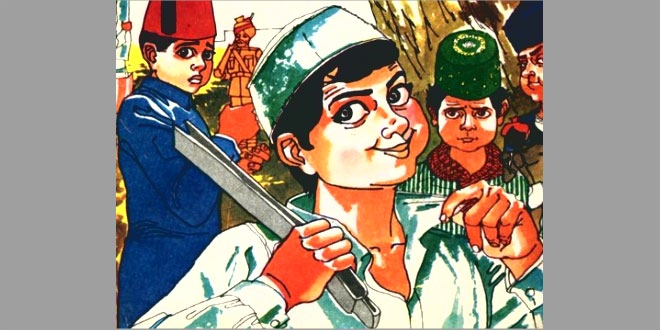 Premchand 2 weeks ago Stories in English Leave a comment 7,546 Views

Mahmood has one more try, “The lawyer will have chairs to sit and tables for his things. Your tongs will only have the kitchen floor to lie on.”

Hamid cannot think of an appropriate retort so he says whatever comes into his mind, “The tongs won’t stay in the kitchen. When your lawyer sits on his chair my tongs will knock him down on the ground.”

It does not make sense but our three heroes are utterly squashed – almost as if a champion kite had been brought down from the heavens to the earth by a cheap, miserable paper imitation. Thus Hamid wins the field. His tongs are the Champion of India. Neither Mohsin nor Mahmood, neither Noorey nor Sammi – nor anyone else can dispute the fact.

The respect that a victor commands from the vanquished is paid to Hamid. The others have spent between twelve to sixteen pice each and bought nothing worthwhile. Hamid’s three-pice worth has carried the day. And no one can deny that toys are unreliable things: they break, while Hamid’s tongs will remain as they are for years.

The boys begin to make terms of peace. Mohsin says, “Give me your tongs for a while, you can have my water-carrier for the same time.”

Both Mahmood and Noorey similarly offer their toys. Hamid has no hesitation in agreeing to these terms. The tongs pass from one hand to another; and the toys are in turn handed to Hamid. How lovely they are!

Hamid tries to wipe the tears of his defeated adversaries. “I was simply pulling your leg, honestly I was. How can these tongs made of iron compare with your toys?” It seems that one or the other will call Hamid’s bluff. But Mohsin’s party are not solaced. The tongs have won the day and no amount of water can wash away their stamp of authority. Mohsin says, “No one will bless us for these toys.”

Mahmood adds, “You talk of blessings! We may get a thrashing instead. My Amma is bound to say, ‘Are these earthern toys all that you could find at the fair?'”

Hamid has to concede that no mother will be as pleased with the toys as his granny will be when she sees the tongs. All he had was three pice and he has no reason to regret the way he has spent them. And now his tongs are the Champion of India and king of toys.

By eleven the village was again agog with excitement. All those who had gone to the fair were back at home. Mohsin’s little sister ran up, wrenched the water-carrier out of his hands and began to dance with joy. Mister Water-carrier slipped out of her hand, fell on the ground and went to paradise. The brother and sister began to fight; and both had lots to cry about. Their mother lost her temper because of the racket they were making and gave each two resounding slaps.

Noorey’s lawyer met an end befitting his grand status. A lawyer could not sit on the ground. He had to keep his dignity in mind. Two nails were driven into the wall, a plank put on them and a carpet of paper spread on the plank. The honourable counsel was seated like a king on his throne. Noorey began to wave a fan over him. He knew that in the law courts there were khus curtains and electric fans. So the least he could was to provide a hand fan, otherwise the hot legal arguments might affect his lawyer’s brains. Noorey was waving his fan made of bamboo leaf. We do not know whether it was the breeze or the fan or something else that brought the honourable counsel down from his high pedestal to the depths of hell and reduced his gown to mingle with the dust of which it was made. There was much beating of breasts and the lawyer’s bier was dumped on a dung heap.

Mahmood’s policeman remained. He was immediately put on duty to guard the village. But this police constable was no ordinary mortal who could walk on his own two feet. He had to be provided a palanquin. This was a basket lined with tatters of discarded clothes of red color for the policeman to recline in comfort. Mahmood picked up the basket and started on his rounds. His two younger brothers followed him lisping, “Shleepers, keep awake!” But night has to be dark; Mahmood stumbled, the basket slipped out of his hand. Mr. Constable with his gun crashed on the ground. He was short of one leg. Mahmood being a bit of a doctor knew of an ointment which could quickly rejoin broken limbs. All it needed was the milk of a banyan sapling. The milk was brought and the broken leg reassembled. But no sooner was the constable put on his feet, the leg gave way. One leg was of no use because now he could neither walk nor sit. Mahmood became a surgeon and cut the other leg to the size of the broken one so the chap could at least sit in comfort.