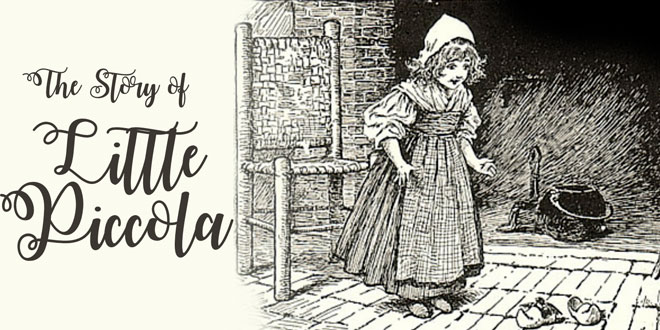 Piccola lived in Italy, where the oranges grow, and where all the year the sun shines warm and bright. I suppose you think Piccola a very strange name for a little girl; but in her country it was not strange at all, and her mother thought it the sweetest name a little girl ever had.

Piccola had no kind father, no big brother or sister, and no sweet baby to play with and love. She and her mother lived all alone in an old stone house that looked on a dark, narrow street. They were very poor, and the mother was away from home almost every day, washing clothes and scrubbing floors, and working hard to earn money for her little girl and herself. So you see Piccola was alone a great deal of the time; and if she had not been a very happy, contented little child, I hardly know what she would have done. She had no playthings except a heap of stones in the back yard that she used for building houses and a very old, very ragged doll that her mother had found in the street one day.

But there was a small round hole in the stone wall at the back of her yard, and her greatest pleasure was to look through that into her neighbor’s garden. When she stood on a stone, and put her eyes close to the hole, she could see the green grass in the garden, and smell the sweet flowers, and even hear the water splashing into the fountain. She had never seen anyone walking in the garden, for it belonged to an old gentleman who did not care about grass and flowers.

One day in the autumn her mother told her that the old gentleman had gone away, and had rented his house to a family of little American children, who had come with their sick mother to spend the winter in Italy. After this, Piccola was never lonely, for all day long the children ran and played and danced and sang in the garden. It was several weeks before they saw her at all, and I am not sure they ever would have done so but one day the kitten ran away, and in chasing her they came close to the wall and saw Piccola’s black eyes looking through the hole in the stones. They were a little frightened at first, and did not speak to her; but the next day she was there again, and Rose, the oldest girl, went up to the wall and talked to her a little while. When the children found that she had no one to play with and was very lonely, they talked to her every day, and often brought her fruits and candies, and passed them through the hole in the wall.