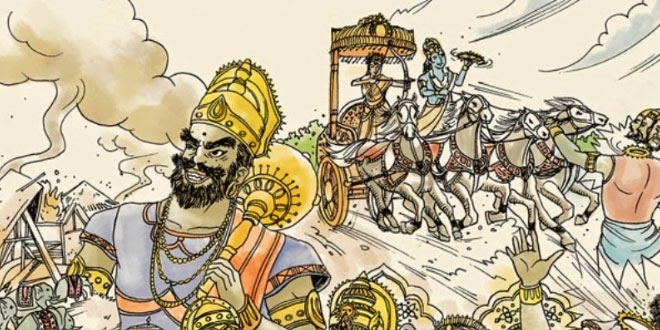 Narakasura was a legendary figure, the progenitor of the Bhauma dynasty of Pragjyotisha. He is considered to be a son of Bhudevi, fathered by Vishnu in his Varaha incarnation. He is claimed as one who established Pragjyotisha. He was killed by Krishna and his son. Bhagadatta of Mahabharata fame, succeeded him.

Bhoomi Devi (mother Earth) had a son named Naraka. Even though Naraka was the son of a divinity, he had the nature of a demon. Naraka was powerful and he took pleasure in terrorizing the inhabitants of the three worlds.

Narakasura would raid and plunder the kingdoms of the three worlds. He did not even leave the women and would kidnap them for his own personal harem. Narakasura heard that Indra, the king of the devas, had thousands of divine elephants in his army. Now Narakasura, greedy that he was, wanted to possess everything, so he attacked the heavens.

Now Indra, feeling humiliated at his loss and even worse that his mother was assaulted, wanted revenge and he knew that there was only one person who was a match for Naraka. It was Lord Krishna.

Indra reached Krishna’s palace when Krishna was spending quality time with his wife Satyabhama. He told Krishna about the happenings and begged him for his help. Krishna was enraged that Naraka might lay his hands on mother Aditi and said that Naraka must die for his insolence.

Satyabhama looked annoyed because Krishna was about to leave her. Wanting to please both Satyabhama and Indra, Krishna decided to take Satyabhama with him into battle. 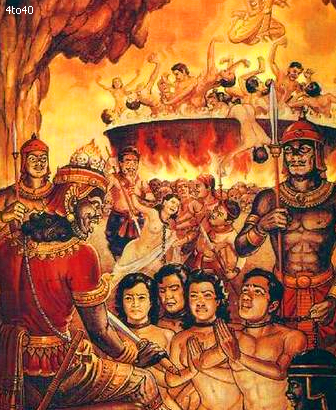 Krishna summoned his mount Garuda (a giant eagle) and made way towards Naraka’s fortress. An impenetrable barrier of magic mountains surrounded Naraka’s fortress. The mountains were such that a barrier would come up from any side that Krishna tried to enter the fortress. Krishna, unperturbed, hurled his mace at the barrier and shattered the entire mountain range in one blow. A downpour of magical weapons rained down on them. Krishna fired multiple arrows and destroyed all the weapons. In this manner Krishna destroyed countless other magical barriers and finally reached Naraka’s fortress.

Naraka’s palace was guarded by the five-headed demon Mura. Mura hurled countless weapons at Krishna, but Krishna shot each one down with his bow and arrow. Then Krishna picked up his flying discus and hurled it towards Mura dislocating Mura’s five heads. Mura fell to the ground, dead.

Krishna challenged Naraka to battle and killed him easily. Bhoomi Devi then sang hymns in praise of Krishna and begged him to take Naraka’s son Bhagdatta under his protection. Krishna placed Bhagdatta on the throne and then freed all of Naraka’s prisoners. The devas showered Krishna with flowers from the heavens.