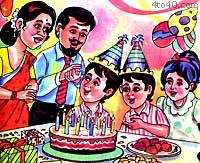 Shashank and Mayank were twins and 10 years old. Every year, their parents would celebrate their birthday with much fanfare. They made it a point to get them new clothes for the party.

One evening, on his return from office, their father informed them that he had been transferred to the Andaman and Nicobar Islands. So all of them would have to shift there after a few days.

That place is surrounded by water. There you will see nothing but water, said one of their neighbours on being told about the transfer.

But the Andaman and Nicobar Islands are also famous for their natural scenic beauty, commented another neighbour.

Soon Mayank and Shashank bade goodbye to their friends, pecked their baggages and left by plane for Port Blair. They had to go further to a smaller island, Rangat, to which they traveled by a small ship.

Both the brothers enjoyed their sea trip very much. While standing on the ship deck for the first time, they saw the dolphins, diving in the water.

Shashank and Mayank were admitted in a good school in Rangat. Rangat was a beautiful place and they settled down happily.

The boys birthday was approaching. They decided that they would all go to Port Blair to celebrate their birthday, and their father agreed.

The day finally dawned but it was raining heavily. The small ship from Port Blair did not come to Rangat. The boys were very disappointed. Then somebody informed them, A cargo ship has just come in. There is a passenger cabin also in that ship. If you have to go urgently, you can sail to Port Blair on it.

However, some people warned them, It is not safe to undertake the journey in this rain.

So the twins father decided not to take them to Port Blair that day. But Shashank and Mayank began to pester him, Papa, you promised us. How can we celebrate our birthday here? Here we cant get any new clothes. We will have no cake and no ice-cream.

The boys began to cry. At last their father gave in. they boarded the cargo ship but its departure was delayed due to rain.

When the ship was in the middle of the sea, it began to rain heavily.

To add to their disappointment, all of a sudden it became dark. The ship began to rock furiously as storm approached.

All right, we will wear our old clothes, the boys consoled themselves. But the ships crew did not feel it wise to go further in such a bad weather. They, somehow, managed to find anchor at a tiny island.

Feeling tired and exhausted, when the twins entered the small guest-house, they had forgotten that it was their birthday today.

At 8 o’clock at night, when they were given rice and dal, they felt amused and enjoyed themselves.