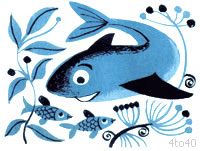 Oh dear, I am so glad that is finished, sighed Mrs. Salinda Sardine, who had been busy spring-cleaning her little sitting-room in Rockbay Terrace. All I need now is some dainty pink seaweed to make new curtains for the window.

Did you hear that? There is some pretty seaweed near Cissie Catfishs house, let us get some and give Mummy a nice surprise, whispered Sammy Sardine to his little sister, Sally. And away they swam across Rockbay.

Here is a lovely bunch, shall we take some of this? said Sally.

Yes, it is just the colour Mummy loves, said Sammy.

Just then Sammy and Sally heard the splash of oars and a gruff voice said:

I think we will anchor here! Come on, boys, throw in the net.

Sally was so frightened when she saw the net coming down, but Sammy only laughed and said:

Dont worry, we are so tiny that we can get through those holes quite easily.

As they turned to swim away who should they see coming towards them with his big mouth wide open, ready to swallow them, but Sandy Shark!

Quick, there is no time to lose, through this net we must go! cried Sammy.

At last the two little sardines plucked up the courage to look round and there was old Sandy Shark in the net turning and twisting, and lashing his tail with rage. He was being slowly pulled up into the boat.

Just what had happened to Sandy Shark they were not sure, but as soon as he had gone, they swam to Rockbay Terrace.

Oh, what a lovely surprise, said Mummy, when they gave her the pink seaweed, but when they told her about Sandy Shark she shook her head and said:

You were very lucky children to escape from the wicked monster. Let us hope that he will never come back to disturb the peace of Rockbay again.