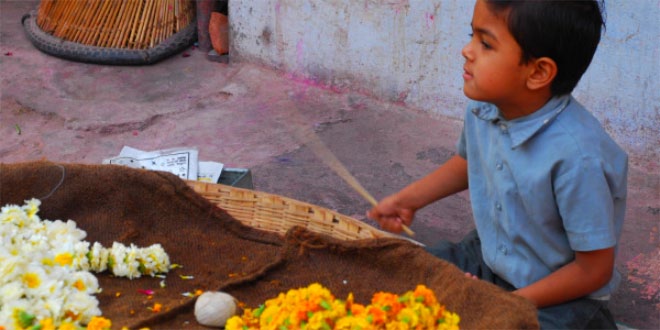 Heartrending Story of A Poor Brother: A Brother’s Story

LET’S SHOW our love while we can, while people need us. That is something I learnt from an incident in Bhopal.

I saw a little boy daily near the Hanuman temple, always in a white tee and black pants, with a small Hanuman pendant around his neck.

He sat with a basket of fresh floral garlands. Be it at six in the morning or nine at night, he would try his very hardest to sell his wares.

I was a frequent temple goer and each time the boy would beg me earnestly to buy a garland. But somehow I never did. Even when I came out, he would follow me to my car, begging me to buy one at least.

Other boys sold flowers too, but none as persistently as he. I went back to the temple recently after a gap of some months.

The boy was there, seated exactly as before. I tried to avoid his gaze, assuming that he would follow me. But he did not budge.

I went inside the temple and came back. But the boy made no effort to sell his garlands.

I thought he was angry or just showing his own self-respect.

I suddenly missed the communication. I always had with this unknown boy and went to him. He looked at me but did not speak.

This was strange. I gathered courage and asked: “Bhaiya, why are you not asking me to buy your garlands?”

He said, “Didi, why should I ask? You are rich but you can’t spend five rupees on my garland. Anyway now I am not so desperate. My sister was suffering from cancer and I had to work for her medicines. My father had left us. My mother makes the garlands and I sell them. We used the money for my sister’s medicines. She passed away two months ago. You can now take one for free.”

I bought them all. But I felt so small. I still repent that I did not respond then when he tried so hard.