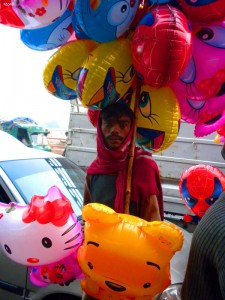 I AM sorry I am a little late in realizing that a new year has already arrived! Like always my priorities were wrong. In the hallucinations and deliriums I began to celebrate the 26th of January before 1st January at Pusa Road, New Delhi.

Did you ever come across the word Rain basera? No? Its not a word from outer-space or from any melody of Indian film. Its a great gesture of humanity, a solid three dimensional proof that as a society we are not insensitive and irresponsible to the plight of our unlucky fellow creatures. It is a night shelter that the government of Delhi offers to those who have nowhere to go during icy winds when you and me sleep in the cozy warmth of heated houses. It doesnt matter that despite these facilities not a wintry night passes when a few dreamers and their dreams consign to their logical end while some lucky cadavers find their photographs in the local newspapers under the heading of unclaimed bodies.

We have just celebrated one of the most loud and boisterous New Year with Jai Ho. Logic tells us that we have every right to celebrate when we have earned to squander by dint of our labour.

Im a God fearing man and my brain is conditioned by my parents to believe that all misfortunes and troubles are ordained and pre-destined for some mysterious purpose of an all-wise Providence. I dont think that city fathers would also be averse to my trumpeted thoughts of piety. Naturally, the myrmidons of law have more faith in the auto-corrections of nature. So they felt it fit to pull down the night shelter at Pusa Road for the future beautification of the capital few days before New Year. These officers of MCD had firm faith in God, Bhagwan, Allah, Ram, Wahe Guru and Jesus and knew that Mighty Power would arrange automatically some new cozy refuge for the 250 living beings, who were rendered homeless from that Rain basera.

When the stars were shining in the sky, a balloon-seller Bhima failed in his struggle to live. He was one of the uprooted displaced occupants of Rain basera and could not brave the intense cold.

Crying inconsolably, his mother Saru, and grandmother Girija pointed to a thin blanket that Bhima has wrapped himself up to beat the cold. Bhima had his food and went off to sleep.

However, just as an hour or two later when Girija tried to wake him up, she found he was dead. He had returned a happy man on the night of December 31 earning over ₹ 300 by selling balloons but he didnt wake up to see the dawn of a New Year, said Saru. Her unsold balloons had burst by Friday afternoon and hopelessly clung to the branches of a tree. His uncle, Hanumanta, told the reporter: Who itna khush tha ke sath wale hotel se aa rahi gane ki awaz par nach raha tha. (He was so happy that he was dancing to the tunes of a song being played in a nearby hotel.) He wanted to give some money to his mother and grandmother. On Friday morning, they cremated Bhimas body.

Now please dont ask or tell these innocent MCD officers or city fathers about this incident because it might spoil their breakfast as it had done for me or you. Please ask God why did He allow the Rain basera at Pusa Road to be demolished without any alternate arrangement? As for Bhima and his family, it was their lot! Jai Ho!