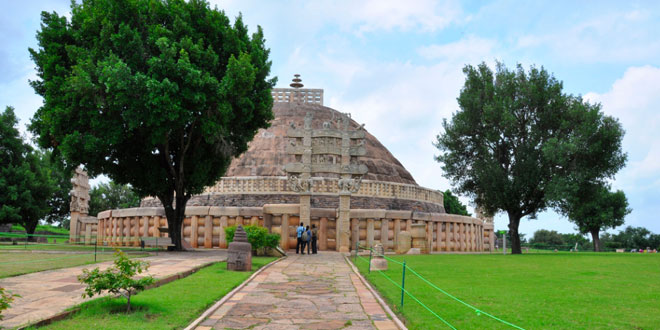 When we speak of Madhya Pradesh, the first name that pops to our mind is Khajuraho. But very few people know that other than the Khajuraho temples, Madhya Pradesh is also famous for the Buddhist shrine called Sanchi Stupa. This shrine is located in the village of Sanchi and is believed to be one of the most important places for Buddhist pilgrims. Apart from the Stupa, there are several other Buddhist monuments dotting the village. Most of these monuments date back to the 3rd century B.C. Recognizing the significance of these monuments, in 1989, UNESCO conferred Sanchi as a World Heritage Site. The ‘great Stupa’ of Sanchi was commissioned by the great Emperor Ashoka. With decline in Buddhism, the monuments of Sanchi were in disrepair until they were documented in 1818 by a British officer and renovation work started after 1881. Nowadays, Sanchi, apart from being a prominent pilgrimage site, is also a very popular tourist destination. Anyone who wants to soak in history and spirituality must visit Sanchi. The Stupas and temples are noted for their intricate and beautiful carvings of religious motifs.

The Mauryan king, Ashoka the Great, commissioned the Stupa in honor of Lord Buddha, in the 3rd century BCE. This was vandalized during the 2nd century BCE. Though many believe that the Sunga emperor, Pushyamitra Sunga, destroyed the original Stupa, there is no clear documentation on who vandalized it. However, his son, Agnimitra Sunga, rebuilt the Stupa and reworked it to twice its original size. Stone railings were added and a harmika was placed on the top. During the rule of the Sunga, the second and third Stupas of Sanchi were also commissioned.

When Buddhism in India was on a decline, the Stupas were neglected and fell into disrepair. In 1818, a British officer, General Taylor, documented the existence of the Stupas. After that, till 1881, the site was ravaged by treasure hunters. A little later restoration work was started and by 1919, under the supervision of Sir John Marshall, the Stupas were fully restored.

Apart from Stupas and temples, there are many other attractions of Sanchi. Just next to the southern gateway lie the ruins of the Ashoka pillar. Just 13 kilometers away from Sanchi are the Udaygiri caves. The caves feature sculptures and inscriptions that date to the Gupta period. The Neelkantheswara temple nearby dates back to the eleventh century A.D and is 60 kilometers from Udaygiri. In Gyaraspur, there are the Athkhamba and Chaukhamba temples belonging to the 9th and 10th centuries A.D. On the hill above Sanchi, lies the Mahadev temple of the 10th century A.D.

The best time to visit Sanchi is always during the winter time. During the summer, it is intolerably hot. So, the best time to go there is between October to March. In November, Chethiyagiri Vihara is celebrated. Traditionally, on this day, relics of two of Buddha’s disciples are displayed for general viewing. Thousands of Buddhists monks and pilgrims congregate on this day at Sanchi.

How To Reach Sanchi

Sanchi is situated nearly 68 kilometers north of Bhopal, the capital of Madhya Pradesh. There is a domestic airport in Bhopal. International travelers should first fly to Delhi and then get a connecting flight to Bhopal.

Travelling by bus is also not a bad idea as most surrounding areas of Bhopal today have good roads. One can also travel by private vehicles or hire chartered taxis.

Along with other holy places associated with Buddhism, Sanchi is also of great importance. The place is very famous among the Buddhists. Apart from its religious significance, Sanchi is also famous for its historical association. There are many monuments and relics from the Mauryan Era, particularly those of the Emperor Ashoka.