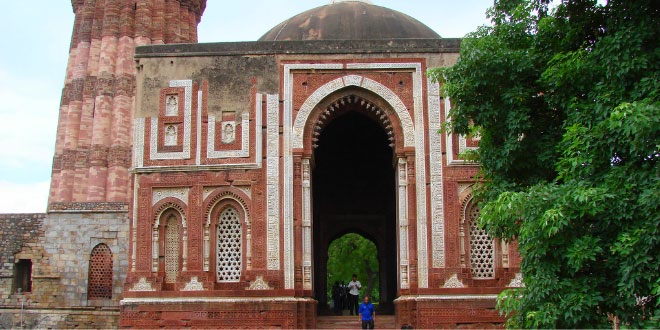 Quwwat-ul-Islam is a unique example of the amalgamation of Hindu and Islamic art. The name of the mosque literally means ‘Might of Islam’. It is also known as the Qutb Mosque or the Great Mosque of Delhi and was the first to be constructed in Delhi after the Islamic invasion in India. This mosque was built by Qutb-ud-din-Aibak, the founder of Slave or Mamluk dynasty. Its design and style is somewhat similar to that of Adhai-Din-ka-Jhonpra in Ajmer, which was built after demolishing the Jain temples and the Sanskrit learning center. Quwwat-ul-Islam was built during the rule of Mohammad Ghori. Later on, Qutb-ud-Din Aibak named this mosque as ‘Jami Masjid’ or ‘Friday Masjid’. The western side of the mosque depicts the saga of destruction of temples. This edifice, made of red and yellow sand stone, stands tall within the Qutb complex and was built together with the Qutub Minar.

The construction work of this masjid began in 1193 A.D. and was completed in the year 1197 A.D. This mosque apparently stands on the ruins of Jain and Hindu temples. Built by Slave ruler Qutb-ud-din-Aibak after the accession of Delhi by Muhammad Ghori, this historical mosque is supported by twenty-seven pillars, apparently taken from Hindu temples built by the Tomars and King Prithviraj Chauhan. Besides this, an iron pillar taken from a Vishnu Temple adorns the middle of the prayer hall of the mosque and is called as the ‘pillar of the law’. In the mosque, a storey at the end of the eastern porticoes is especially reserved for women. Iltutmish, the successor of Qutb-ud-din Aibak, added three more arcades to the main prayer hall. Later on, in 1300 A.D., during the rule of Alauddin Khilji, the main entrance gate ‘Alai Darwaza’ was built and a court was added on the eastern side of the mosque. In the arena of the mosque, there is a tomb of Imam Zamim, who was the main priest here during the rule of Sikander Lodhi. At present, the mosque is at the verge of collapsing but still the floral designs and the transliterations of the Holy Quran and the graphic symbols remains intact, which are amongst the best specimens of Hindu-Islamic structures.

Quwwat-ul-Islam mosque is a brilliant amalgamation of Hindu and Islamic architecture styles. While on one hand, you have beautifully carved ceilings and pillars ornated with Hindu motifs like bells, cows, branches, leaves, on the other hand, you have calligraphic carved transcriptions of Quran on the porticoes. Furthermore, the arch in the main prayer hall is also one of the best examples Islamic and Hindu artistic patterns.

The favorable time to visit the shrine is from October to March, when the atmosphere is pleasant and enjoyable.

By Air: The nearest airport to the shrine is New Delhi airport. After reaching the airport, you can hire a taxi to reach the shrine.

By Train: Delhi is easily accessible by train from all corners of the country. You can reach New Delhi by train and then take a cab or a rickshaw to Mehrauli.

By Road: ISBT is the main bus stand in Delhi. After reaching the bus stand, you can easily get the bus to go to the shrine.

Quwwat-ul-Islam is one of the oldest mosques in India. Besides being a holy shrine, it is also a tourist site. This historical mosque is a perfect reminder of the Muslim invasion in India.