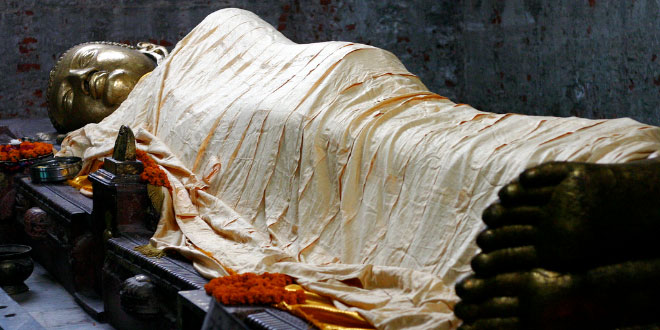 Kushinagar, a district in Uttar Pradesh, India, is one of the major Buddhist pilgrimage centers because it is the place where Lord Buddha is believed to have entered Mahaparinirvana (death). It was near the Hiranyavati River that Buddha took his last breath and was cremated at the Ramabhar Stupa. Located at a distance of 55 kilometers away from Gorakhpur, Uttar Pradesh, Kushinagar can indeed be a holy experience not only for Buddhist but also for all travel enthusiasts and historians. Numerous excavations have unearthed many monasteries and Stupas making it a very important pilgrimage destination for Buddhists. As a place with religious and spiritual significance, Kushinagar continues to attract both pilgrims and tourists. Kushinagar is home to many stupas and monasteries, though many of them are not yet properly restored. A visit to Kushinagar will not be complete without visiting the Mahaparinirvana temple and Nirvana Stupa which are closely associated with Lord Buddha’s death. Let us take a look on the important pilgrimage sites in Kushinagar.

On his eighty-first year, after delivering a speech at the Vulture’s Peak at Rajgir, Lord Buddha along with Ananda left for the north. After a small nap, he crossed the river Ganges and entered a village called Beluva. There he fell ill, but proceeded to Vaishali in spite of the sickness. They then proceeded to Pava and then to Kushinagar. Buddha rested near a village on his way to Kushinagar from Pava, where he met a Malla nobleman who talked to the Buddha. Deeply moved by Buddha’s teachings, the man offered two pieces of shining gold cloth but its glitter was completely outshone by Buddha’s radiance. It is believed that Buddha’s complexion became prodigiously brilliant both on eve of his enlightenment and nirvana. Buddha thus reached Kushinagar and many noble men came to meet him there. There was a 120 year-old Brahmin among them, named Subhadra who, after getting attracted to Buddha’s speech, expressed his desire to join the Sangha, and is believed to be the last monk to be ordained by the Buddha. Upon the third watch of the night, Buddha called up his disciples thrice, and asked if there were any confusions remaining with regard to the Buddhist doctrine. Receiving silence as reply, Buddha gave the famous advice “impermanence is inherent in all things. Work out your own salvation with diligence”. After this last sermon Buddha entered Mahaparinirvana through meditation. And, it is said that even nature responded to this. The earth shook, stars blast off and the atmosphere reflected celestial music. It is said that the pyre was not burnt until Mahakashyapa, the great disciple of Buddha, arrived and when he stepped into the cremation ground, the pyre burnt automatically. Surprisingly, only the skull bone, teeth and the inner and outer burial garment remained after the cremation, which the Mallas of Kushinagar decided to divide among them, and so, they became the most fortunate people to receive all the remnants of Lord Buddha’s body. However, the holy relics had to be divided into eight folds and eight great Stupas were built to house them. These relics were yet again subdivided, when Emperor Ashoka decided to build 84,000 Stupas. Now, the relics are contained in many Stupas scattered across Asia. During his visit to India, FaHien found monasteries at Kushinagar but, almost all of them were in ruins by the time of Huen Tsang’s India expedition. 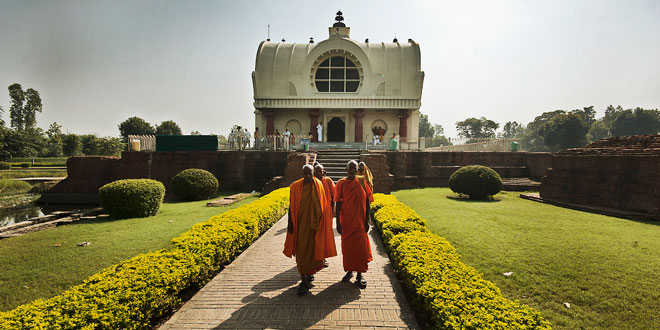 The Mahaparinirvana temple, dates back to the 5th century, and is famous for the reclining statue of Lord Buddha, which is 6.10 meters long. This statue represents his death. This statue was excavated 1876.

The Nirvana Stupa is situated to the east of the Mahaparinirvana temple. This huge Stupa was excavated by Carllel in 1867, underneath which was found a copper vessel 2.74 meters high with Brahmi insciptions. This stupa is of ultimate importance to the Buddhist as it is believed that it contains Buddha’s relics.

The Mathakuar Shrine is situated about 400 yards away from the Mahaparinirvana temple. This shrine is famous for the black stone Buddha statue in Bhumi Sparsha Mudra. It is believed that Lord Buddha delivered his last sermon here.

Ramabhar Stupa, measuring a height of 49 feet, is the place where the Lord Buddha was cremated. This Stupa is mentioned as Mukut-Bandhan Vihar in ancient Buddhist transcripts.

The Japanese Temple is famous for the Buddha idol made of eight metals which was built by Atago Isshin World Buddhist Cultural Association of Japan. At the Kushinagar Museum, there are 248 excavated ancient objects which are exhibited to the public.

The ideal time to visit Kushinagar is from October to March.

How To Reach Kushinagar

The nearest rail-head is at Gorakhpur, which is an an important rail-head in Uttar Pradesh, and is connected to other major Indian cities.

Kushinagar is connected to the rest of the nation through an extensive network of roads. The major travel hubs that are connected to Kushinagar are Gorakhpur (51 km), Sravasti (254 km), Sarnath (266 km) and Agra (680 km).

Kushinagar is one of the most important places which are closely associated with the Lord Buddha. The major excavations prove this place was an important Buddhist center. The place has a number of Stupas and monasteries that date back to the Ashokan period. A visit here would indeed be a brush with history.